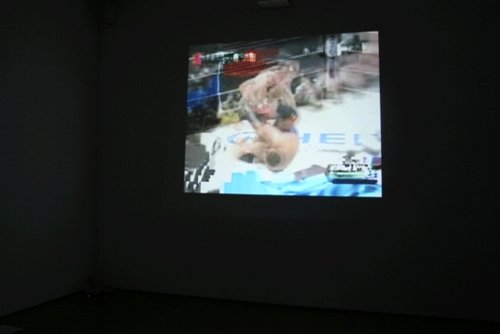 Paul B. Davis utilises outdated/obsolete computer technologies, including most notably Nintendo games systems, in order to perform specialist interventions into the territory of the digital art medium.

While the materials utilised are ready-made, the use principle is entirely hand crafted; Davis altering the existing code while adding nothing new. This idea, the implemented projection of an alternative potential onto a ready- made object, exactly and succinctly captures the structured abridgement between computers and art, between theory and praxis, ongoing in Davis' practice.

This exhibition comprises two large projections. One is a new NES hack that takes its form from the pirate video game cartridges that first alerted Davis to the possibility of intervening with games. These 'multicarts' often had for or five different games on one cartridge and echoing this, Davis is presenting five different works on one machine. Fittingly these pirated works are not all by Davis' hand, as he loots excerpts from other Beige collective hacks, questioning authorship in the already grey area of software as readymade.

The second piece is a new video, a collaboration with the trans-media collective Paper Rad, which accentuates and aesthecises artefacts inherent in video compression formats, particularly MPEG-4. A third work, in collaboration with Cory Arcangel, titled Fat Bits, is a triptych of monitors which presents close up images of an NHL ice hockey match, converted into imagery housed in a NES. Reminiscent of the timeless NES Ice Hockey game, these abstracted motions of brawling figures present a bacon-esque scene, groaning and grunting in a slow motion and distorted struggle.

Aesthetically Davis' images are solid slabs of reordered, pure proto-modernist colour. With his alterations a new game, a new screen and a new surface emerges. The materiality of a hacked game cartridge, set into the instantly recognisable Nintendo console, guarantees that the recession into a purely two-dimension digital fold is never as total as it is in the work of other digital artists, the work remains an object. Further, the dizzying hyper-graphics of many related practitioners are surrendered in favour of the neat, blocky pixilation of the outdated NES operating system. This show also includes an installation featuring 8-bit Construction Set - an art/music/concept work rendered in vinyl which will be mounted on a record deck within the gallery, visitors being invited to play it out to their own satisfaction.

Quoting his influences as ranging from formalised British computing theory (Alan Turing) to the advent of widespread domestic console gaming (Mario), Davis has pioneered a truly unique strategy through a multiplicity of actions, networks and artistic creations. Davis' practise is at once rigorous, conceptual - even nerdy, while nonetheless fully intimate with the patois, style, attitude and aesthetic of retrogressively inspired, data-bit multi-media contemporary culture, that has recently forced its way into the public consciousness.

Paul B. Davis, as part of BEIGE, has exhibited internationally at venues including the The Whitney Biennial 2004 (NYC), Vilma Gold (UK), Team Gallery (NYC) and Foxy Productions (NYC).