The most important exhibition of contemporary art. The singular character of the exhibition has been preserved. Every five years, a new director is chosen and the exhibition is reinvented, a concept which to date has been affirmed by the public's interest. Roger M. Buergel, artistic director and Ruth Noack, curator, for this editions had elaborated 3 main leitmotifs (Is modernity our antiquity?/What is bare life?/What is to be done?) and two projects: 'Documenta Magazines - a platform and three issues' and 'Documenta 12 advisory board'. 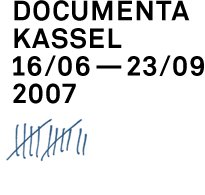 Is modernity our antiquity?/What is bare life?/What is to be done?

documenta is regarded as the most important exhibition of contemporary art, drawing attention from all over the world. It was initiated in 1955 by the artist and art educator, Arnold Bode, in Kassel. After the period of Nazi dictatorship, it was supposed to reconcile German public life with international modernity and also confront it with its own failed Enlightenment. Nobody would have thought at that time that the exhibition, often called the Hundred Day Museum, would become an unparalleled success. Nevertheless, the twelfth documenta will be taking place in summer 2007.

The singular character of the exhibition has been preserved. Every five years, a new director is chosen and the exhibition is reinvented, a concept which to date has been affirmed by the public's interest. The number of visitors has continually risen. More than 650 thousand visitors came to Documenta11. Under continually changing directorship, and in the equally leisurely and inexorable rhythm of five years, documenta has advanced to become an authoritative worldwide seismograph of contemporary art. At documenta it becomes manifest whether art is succeeding in grasping the world in images and whether these images have validity for its public.

Roger M. Buergel is the artistic director of documenta 12

The artistic director of documenta 12 is Roger M. Buergel, an internationally active exhibition organiser and curator who was born in Berlin in 1962. Together with the art historian, Ruth Noack, as curator, he will, in line with documenta's claims, show art from the most various regions of the world and in all conceivable media. The works should not be shown simply unrelated to each other in a line, but be put into relationship with each other. The Leitmotifs: Three questions posed for art but also for its public To initiate such a productive exchange, documenta poses three questions for art, and also for its public: Is humanity able to recognise a common horizon beyond all differences? Is art the medium for this knowledge? What is to be done, what do we have to learn in order to cope intellectually and spiritually with globalisation? Is that a question of aesthetic education and cultivation? What constitutes life, when everything is subtracted which does not belong essentially to life? Does art help us to penetrate to what is essential?

These leitmotifs and questions which influence the curatorial process already require resonance space in the lead-up to the exhibition, both on local and international levels, which will be generated by two documenta 12 projects:

documenta 12 advisory board
"From an exhibition which I call political I expect that it will educate and cultivate its public, that is, draw it out of the attitude demanded by the mass media, which amounts to us being very well informed but unable to act." (Roger M. Buergel) documenta 12 aims to support its public in relating the artistic works exhibited to their own lives. It is interested in local knowledge and also in making the exhibition work on a local level. Consequently, it seeks dialogue with people in Kassel who are interested in questioning history and the present, in asking about the issues and problems of the city and its residents. This contact manifests itself in the documenta 12 advisory board. About forty experts from Kassel are working on the leitmotifs to documenta 12 in this committee and confronting these, as the documenta 12 magazines are, with their own specific knowledge.

Opening hours
From 10 am to 8 pm daily

Tickets
Electronic vouchers are issued by the visitor service. These can be exchanged for tickets at the visitor service points on the grounds of the exhibition from 16 June 2007. Tickets may also be purchased from numerous local sales points throughout the duration of the exhibition.
Discounts are available for pupils and students. Children under 7 are admitted free of charge. Valid identification must be shown to receive discounts.

Tours and more
The documenta 12 visitor team is happy to answer any queries you may have about the booking procedure for guided tours. Tel. +49 180 511 56 11

documenta 12 has three leitmotifs. It is no accident that they take the form of questions. After all, we create an exhibition in order to find something out. Here and there, these motifs may correspond, overlap, or disintegrate – like a musical score.

Is modernity our antiquity? This is the first question. It is fairly obvious that modernity, or modernity's fate, exerts a profound influence on contemporary artists. Part of that attraction may stem from the fact that no one really knows if modernity is dead or alive. It seems to be in ruins after the totalitarian catastrophes of the 20th century (the very same catastrophes to which it somehow gave rise). It seems utterly compromised by the brutally partial application of its universal demands (liberté, égalité, fraternité) or by the simple fact that modernity and coloniality went, and probably still go, hand in hand. Still, people's imaginations are full of modernity's visions and forms (and I mean not only Bauhaus but also arch-modernist mind-sets transformed into contemporary catchwords like “identity” or “culture”). In short, it seems that we are both outside and inside modernity, both repelled by its deadly violence and seduced by its most immodest aspiration or potential: that there might, after all, be a common planetary horizon for all the living and the dead.

What is bare life? This second question underscores the sheer vulnerability and complete exposure of being. Bare life deals with that part of our existence from which no measure of security will ever protect us. But, as in sexuality, absolute exposure is intricately connected with infinite pleasure. There is an apocalyptic and obviously political dimension to bare life (brought out by torture and the concentration camp). There is, however, also a lyrical or even ecstatic dimension to it – a freedom for new and unexpected possibilities (in human relations as well as in our relationship to nature or, more generally, the world in which we live). Here and there, art dissolves the radical separation between painful subjection and joyous liberation. But what does that mean for its audiences?

The final question concerns education: What is to be done? Artists educate themselves by working through form and subject matter; audiences educate themselves by experiencing things aesthetically. How to mediate the particular content or shape of those things without sacrificing their particularity is one of the great challenges of an exhibition like the documenta. But there is more to it than that. The global complex of cultural translation that seems to be somehow embedded in art and its mediation sets the stage for a potentially all-inclusive public debate (Bildung, the German term for education, also means “generation” or “constitution”, as when one speaks of generating or constituting a public sphere). Today, education seems to offer one viable alternative to the devil (didacticism, academia) and the deep blue sea (commodity fetishism).

A Production Space for the Exhibition Medium

documenta 12 considers itself a medium – the exhibition is not conceived just as physical area for representation, but also as a production format that extends over the pure exhibition space in terms of both time and space. In order to organise this extended exhibition space as a community, documenta 12 developed two models that have been working in a complementary manner since the beginning of 2006: the network of editors of the documenta 12 magazines and the documenta 12 advisory board, which is based in Kassel. In various places in the world and in various realms of art, both have supported the transfer of local knowledge between people and their public. At the beginning of the exhibition, this transfer will be extended by a further dimension: documenta 12’s art education programme, which will motivate the public to bring its own intellectual and aesthetic resources into play in the process of coming to terms with the artistic work.

These different production formats will merge on the local level during the exhibition in the summer of 2007. The space for this merging is documenta-Halle. Here, for a hundred days, the editors of the magazine network will meet and work together with the members of the advisory board and the art educators. The object is to bring together the various levels of this exploration of the leitmotifs of documenta 12 which the magazines, the advisory board, and the art educators have each identified, to develop them further in a common effort, and to shape this educational process together with the public.

The documenta-Halle will therefore be a space of shared educational effort, documentation, and presentation, accessible to the public. The approximately 100 magazines participating in the network will be presented in the upper area of the documenta-Halle; these include many media that are difficult or impossible to obtain outside their local area of distribution. In addition, about 140 collaborating editors will be guests in Kassel and in the documenta- Halle during the hundred days.

The advisory board is bringing its activities into the city, and will play a role in various locations there during the summer. A system of signposts will tie these activities to the Halle, so the public can find its way to the city, its issues, and its residents. Supplementing the guided tour offerings for which reservations can be made, the 50 art educators will carry out their own special projects, in which new forms and contents of art education will be explored and processed together with selected groups. These formats will be developed in documenta-Halle and will also be included as a resource.

We also invite the public to participate in this continuous process of work and education. Thus, every day at one o’clock there will be a one-hour Lunch Lecture in the foyer of documenta Halle. In this forum, the triad consisting of the magazine network, the advisory board, and the art educators will present and discuss their findings with the immediate audience as well as with the broader public. Discussions with documenta 12 artists, as well as presentations of invited guests and initiatives will also take place in this location.

In order to provide space for the developing content, the programme of the Lunch Lectures will be only established during the course of the hundred days: a weekly "menu” publicised on the documenta 12 website, as well as through the flexible distribution system, will provide information about the events of each upcoming week. The production space of documenta-Halle is further extended by a public lounge in the foyer, where not only work, but also rest, relaxation and refreshments are appropriate; in addition there will be a café in the lower area of the Halle. Finally, the Press Centre for journalists directly adjoins the workrooms.