The exhibition includes five large-format photographs presented for the first time along with a selection of some 30 photographs from the key formative periods in the artist's career. The five prints on view all share a similar rhythm and pattern and were deliberately torn in order to resist the square format of photography as well as, when unframed, to further soften the edge between the image and the wall. 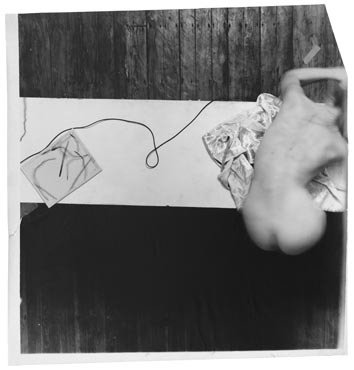 Victoria Miro is pleased to present the gallery's second solo exhibition of work by American artist Francesca Woodman. The exhibition will include five large-format photographs presented for the first time along with a selection of some 30 photographs from the key formative periods in Francesca Woodman's career - Boulder, Colorado; Providence, Rhode Island; Rome and finally in America again at the MacDowell Colony, New Hampshire, and New York in 1980.

Released for the first time by the Estate of Francesca Woodman, the five photographs from a series entitled Swan Song were originally produced for the artist's graduate exhibition at Rhode Island School of Design in 1978. Forfeiting the intimate scale characteristic of her work, these one metre square images move the medium of photography away from its expected format of flat print on the wall by exaggerating the scale, and alluding to an alternative space.

The five prints in this exhibition all share a similar rhythm and pattern that marks the continuity within the series. The same props are used throughout - fur, feathers, wire and a white sheet that both covers and supports Woodman's elongated, fragmented body. The prints were deliberately torn in order to resist the square format of photography as well as, when unframed (as they were installed in her graduate exhibition), to further soften the edge between the image and the wall. Woodman was to return to the larger scale towards the end of her career in 1980.

Woodman tested the boundaries of bodily experience in her work. Using her own body in various stages of transformation, deformation, alteration and effacement, the ensuing photographs suggest a strong sense of self-displacement. Often nude except for individual body parts covered with props, sometimes wearing vintage clothing, the artist is typically sited in empty or sparsely furnished, dilapidated rooms, characterised by rough surfaces, shattered mirrors and old furniture.

In some images Woodman quite literally becomes one with her surroundings, with the contours of her form blurred by movement, or blending into the background, wallpaper or floor, revealing the lack of distinction of both - between figure and ground, self and world. In others she uses her physical body literally as a framework in which to create and alter her material identity. Holding a sheet of glass against her flesh allowing its transparent surface to frame her face and body. By squeezing her body parts against the glass and smashing her face, breasts, hips, buttocks and stomach onto the surface from various angles, Woodman distorts her physical features making them appear grotesque.

Through fragmenting her body by hiding behind furniture, using reflective surfaces such as mirrors to conceal herself, or by simply cropping the image, she dissects the human figure emphasising isolated body parts. In her photogrpahs Woodman reveals the body simultaneously as a deeply constituted active subject that is the producer of meaning; that although insistently there, is always somehow absent. This game of presence and absence argues for a kind of work that values disapperance as its very condition.

Francesca Woodman has recently been the subject of a major monograph published by Phaidon Press Ltd, that includes contributions by Chris Townsend and Betsy Berne, and previously unpublished extracts from Woodman's journals edited by George Woodman. Tate Modern is also currently dedicating an individual display to Francesca Woodman's work.

At the age of thirteen Francesca Woodman took her first self-portrait. From then, up until her untimely death in 1981, aged just 22 she produced an extraordinary body of work (some 800 photographs) acclaimed for its singularity of style and range of innovative techniques. Woodman studied at Rhode Island School of Design, from 1975 - 1979, receiving a grant to spend a year in Rome to continue her studies. Whilst there she produced an extensive body of work and had her first solo exhibition at a bookshop and gallery specializing in Surrealism and Futurism.

Since 1986, her work has been exhibited widely and has been the subject of extensive critical study in the United States and Europe. Woodman is often situated alongside her contemporaries of the late 1970's such as Ana Mendieta and Hannah Wilke, yet her work also foreshadows artists such as Cindy Sherman, Sarah Lucas, Nan Goldin and Karen Finley in their subsequent dialogues with the self and reinterpretations of the female body.

The largest solo presentation of her work to date was curated by the Fondation Cartier pour l'art contemporain, Paris in 1998 touring to venues including Kunsthall, Rotterdam; The Photographers Gallery, London and Douglas Hyde Gallery, Ireland. Woodman's work has featured in many international group exhibitions and is represented in collections including The Metropolitan Museum of Art; The Whitney Museum of American Art; MoMA; Detroit Institute of Arts and Fondation Cartier pour l'art contemporain.