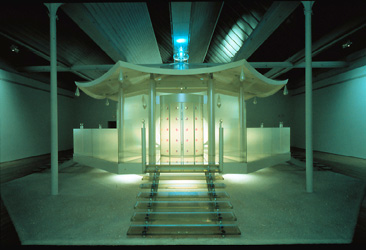 Japanese artist Mariko Mori (born 1967), one of the most innovative young artists within media art today, is now represented by her first solo exhibition in Scandinavia. Following studies at Chelsea College of Art in London, among other places, and an early career as model and designer, she now devotes herself to video installations, high-tech architecture, monumental photographs and intimate drawings that rely for inspiration on both eastern and western art, the history of western art and religion, fashion illustrations and popular culture.
She uses herself as model in films and photos that combine performance, fashion, high technology and art, creating a futuristic persona: half woman, half cyber-girl.
The central work in the Rooseum exhibition is Dream Temple, 1999, whose three main themes are energy, meditation, and technology. These are manifested in a complex, multi-media and spiritually high-tech temple, into which viewers are invited, one by one, for a magnificent audio-visual experience. The work is rooted in tradition while utilizing the most recent technology to achieve the liberation of body and spirit. The physical construction is inspired by a Japanese temple from the early Nara period (Temple of Dreams in Horyuji, dating from 739 A.D.). Instead of wood, Mori has chosen dichroic glass, whose color shifts according to the position of the viewer relative to the surface of the glass. Her work Enlightenment Capsule, 1998, consists of a transparent lotus blossom made from fiber-optical cables in a glass capsule. The capsule is connected to a sensor on the roof of the museum which utilizes chromatic deviation to separate ultraviolet and infrared rays from the rays of sunlight. Light has a dualistic material and metaphysical function: visible and invisible forces working together to achieve a combination of the spiritual and science. Other works include photography: Kumano, 1997-98; a video installation: Kumano (Alaya), 1997-98, and Garden of Purification, 1999, a Japanese garden created from salt crystals, colored stones that symbolize the gradual purification of the various parts of the human body, and 51 stepping stones for the garden. In addition, there are some 30 drawings based on the film shown in Dream Temple.