The artist's work has many of the characteristics of folk art - a rejection of academic technique, a preference for centralized or all-over compositions, and a prioritization of the local rather than the general. 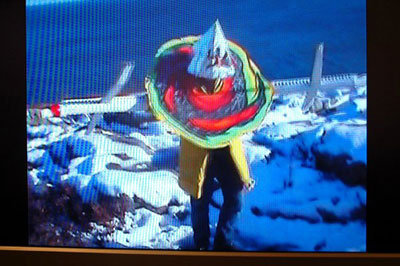 The Good People of SUNDAY are pleased to announce Wood Folks is Good Folks, the first New York solo show by Jacques Louis Ramon Vidal. Vidal's work has many of the characteristics of folk art - a rejection of academic technique, a preference for centralized or all-over compositions, and a prioritization of the local rather than the general. And yet his use of folk idioms has very little to do with the populist and wholesome values that underpin the majority of the work, which usually bears that name. His work is a complex intermingling of "wayward forms and subjects" treated with both reverence and skepticism.

Vidal follows the logic of his cultural material to the letter, allowing the works to create themselves. But this strategy of "truth to material" has a very different result in his work than it did in the work of the purist sculptors and architects who initially advanced the idea as a method. Vidal's cultural materials are contaminated to begin with, having developed lives of their own before he got to them, and which he generously allows them to keep. He strategically avoids what might be referred to in the art world as appropriation, instead taking his cues from the sub-cultural subjects he investigates. This is the documentary aspect of the work. But, unlike the traditional "objective" documentary of folkloric traditions, Vidal's work eschews the institutional archiving impulse and opts for a participatory role, preserving the weirdness and ambiguity of his subjects. Sometimes this takes the form of devotional objects, as in his collages. Other times they seem to be promotional objects: provisional sculptures created to promote some sort of attraction or live act, as in the albino alligator head. Still other times the subject itself remains obscure and the material means are studied and adopted from regional traditions, as in his hinged wooden mannequin works that seem to refer to rural handmade children's toys.

The performances in which he employs these objects as props are a pastiche of storytelling, salesmanship, and circus barking. Like a twisted town crier, Vidal explains the logic and narrative behind his objects. In the undocumented "Diagram of the Internet" he relates a story from his adolescence about his experiences with chat rooms. Moving from one transparent plastic room to the other, Vidal covers himself in mud from a bucket and then washes it off using suds from an identical bucket. This, he claims, is a metaphor for the wholesome and unwholesome aspects of the Internet. In a combination of scripted material and improvisatory gestures, the performance illuminates a pair of large head-in- profile shaped collages behind him on the wall. One is composed of people covered in mud, taken from photographs of mud wrestling, and the other of people covered in soap bubbles, taken from fraternity "suds-parties".

Jacques Vidal takes what is best from regional traditions: their mystery, their iconoclasm, and their agency, exposing and documenting them in their own languages. This in turn has the implicit effect of revealing the "regional" aspects of all cultural production, and exposing the multiplicity of historical trajectories within an institutional culture of modernism whose agendas have dictated that these should be swept under the rug.

Jacques Louis Ramon Vidal (b. 1982, Columbus, OH) lives and works in Chicago, IL. He is an MFA candidate at Yale University School of Art, New Haven, CT and received a BFA from the School of the Museum of Fine Arts, Boston MA. His work has been included in exhibitions at the LaMontagne Gallery in Boston, MA; Dam Stuhltrager Gallery in Brooklyn, NY; and the Metro Mall in Queens, NY; among others. His work has been reviewed in the New York Times. Wood Folks is Good Folks is the artist's first New York solo show. Vidal's interests include Sugar Free Red Bull, wood (of all kinds) and working part-time at the Burger King.


In the project space: SUNDAY is pleased to present the New York debut of Zurich-based artist and musician Tom Huber. Tom Huber's intimate and delicate photos often express a great sense of humor and bear the lightness of snap shot photography. The exhibition will include new photographs focused upon Western subjects such as cowboys, horses, and dusty landscapes as well as the video I Ride My Horse To Death, which recently won an award at Solothurner Filmtage.

"For me, this is a new way of seeing things. It's strong, it's sinister, it's gothic, it's nothing I have seen being produced in the U.K., it is in its best ways: new European photography." – James Reid, Photo Editor, Wallpaper, London, about Tom Huber's work).

Tom Huber (b. 1976, Zurich, Switzerland) attended the Gerrit Rietveld Academy, Fotografie, Amsterdam and Hochschule für Gestaltung, Vorkurs, Zürich; he currently lives and works in Zurich. In addition to this exhibition, his work has been included in exhibitions and screenings at Gallery StaubKohler, Zurich; Kunstmuseum Thun, Projektraum ENTER, Thun; Stiftung BINZ39, Zürich; and Galerie b2, Leipzig, among others. He has beten the recipient of numerous awards including the First Prize category at the Solothurner Filmtage. He has collaborated with Tobias Nölle to record several soundtracks and his debut album Playing For the Goats was released in 2006.