Circa 70. The show focuses back to the late 1960s and early 70s, repositioning the contemporary viewer to sculptural work by the two still celebrated and active women artists. The artworks coexist in surprising harmony despite their completion by two very separate artists within a shifting political and artistic landscape. 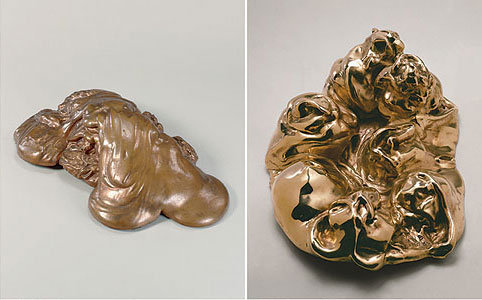 Cheim & Read is pleased to announce Circa 70, an exhibition of works by Louise Bourgeois and Lynda Benglis. The show focuses back to the late 1960s and early 70s, repositioning the contemporary viewer to sculptural work by the two still celebrated and active women artists. Both Bourgeois and Benglis are represented by Cheim & Read. The show is accompanied by a full color catalogue with an essay by Postminimalist scholar Robert Pincus-Witten.

In this show, sculptures by Bourgeois and Benglis, mostly completed between 1967 and 1974, coexist in surprising harmony despite their completion by two very separate artists within a shifting political and artistic landscape. The decade has since culminated in a continued search for identity, defined in part by Postmodernism and its divergent offspring. The rejection of Modernism's utopian autonomy fostered a theoretical and conceptual playground among artists and critics; the rebellion echoed further in the outspoken political activism of the public sphere.

Working within this charged artistic atmosphere, at the cusp of changes to come, Bourgeois and Benglis created material-savvy sculptures more attune to messy abstraction and process-oriented gesture than to conceptual formalism. Their sculptural manifestations explored autobiographical experience and the female subject (not object). Robert Pincus-Witten, in his catalogue essay, positions Bourgeois and Benglis not under the overarching definition of Postmodernism, but rather within a more finely characterized Postminimalism, citing their acceptance of Abstract Expressionism's "transcendent potential" and their physical, hands-on, material explorations.

Though the two artists are 30 years apart in age--Bourgeois was born in 1911 and Benglis in 1941--their sculptures in the early 1970s have unexpected similarities. Both artists created organically-shaped, often grotesque amorphous forms. Both reference the undulating, layered landscape of the body and its private, internal anatomy while connecting to the ripe fecundity of the natural world, and the earth's own internal brewing and bubbling. As Pincus-Witten writes in the essay; "...oozing layers--vaguely repulsive, polymorphous, both gynecological and urological--are metaphors for a mucoid, mushrooming magma." In addition, the phallus is frequently represented by Bourgeois and Benglis. By knotting, twisting and abstracting it they undermine its power, and in this way, the power of the male; their aggressive attack on the phallus becomes a defiant reaction against a male-dominated art world.

Bourgeois, now 95, has led a long and prolific artistic career. Her visceral work, spanning several artistic movements, has always focused on the symbolic and the psychological, actively engaged with subjects related to female identity (male/female, marriage/family, mother/father), and to her own autobiographical story. Bourgeois was a trailblazer for the younger Benglis, who is known for her wide range of materials and her exploration of elusive forms referencing anatomy, nature, sexuality and gender. Benglis's notorious 1974 Artforum ad, where she posed nude with a provocatively held dildo, subsequently positioned her within a politicized context. Finding their common theme, Pincus-Witten writes: "...both artists radically re-imagine the forbidden, the taboo."

Benglis's and Bourgeois's sculptures continue to provide pause. Revisited, the work is still shocking, still charged with the energy of the artists' physical manipulation of material and their intuitive, emotional and rebellious response to a burgeoning decade. More than 30 years later, their work provides reflection on our own cultural and political situation.