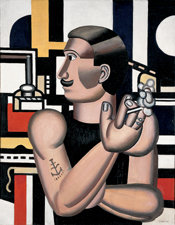 This spring, the Corcoran Gallery of Art will host the critically acclaimed exhibition, Modernism: Designing a New World 1914-1939, from March 17 through July 29, 2007. It is the largest and most comprehensive exhibition on Modernism to be staged in the United States to date and was originally organized by London’s Victoria and Albert Museum (V&A). In fact, the Corcoran will be the show’s only American venue, following its installation at the V&A and MARTa Herford in Germany.

“This show demonstrates how Modernist art, design and architecture still affect nearly every aspect of our lives. It takes a comprehensive look at Modernism, featuring everything from teacups to buildings with no gaps in between,” said the Corcoran’s new director and president Paul Greenhalgh.

This ground-breaking and vast exhibition explores the foundation and meaning of Modernist art and design and its evolution into a mass movement that continues to impact the way we live. As it explores key Modernist movements—such as Bauhaus, DeStijl, Constructivism and Purism—the exhibition reveals how the distinctive style developed and what principles defined it. The show also investigates Modernism’s key themes, including Utopia; the role of the factory and mass production; the spiritual aspect of modern life; fascination with the healthy body and organic forms found in nature; and, national identity.

Modernism contains more than 390 works and 50 film clips and encompasses a broad range of media, including industrial and graphic design, architecture, painting, film and photography. While its works will represent 17 countries, the Washington exhibition will have a distinct American flavor, featuring American works not in the V&A’s exhibition. In fact, the Corcoran is a key lender to this exhibition, with 15 works coming from its permanent collection.

Modernism is understood more as a loose collection of utopian ideas than a movement or single approach. Modernist artists aimed to use new art and technology to positively transform the world around them. The Modernist aesthetic rejected ornamentation, embracing abstract, geometric forms and strong colors. As such, it provided a template for the Modern world.

* The first built-in modern kitchen to be manufactured in large quantities, the “Frankfurt Kitchen,” discovered recently in Frankfurt after 80 years of continual use, and the prototype for all subsequent kitchens.
* One of the rarest Modernist cars—the streamlined, dorsal-finned Czech Tatra T77.
* Paintings and collages by artists such as Braque, Picasso, Léger, Mondrian, Kandinsky, Klee and Sheeler.
* More than 15 architectural models, including legendary prototypes by Le Corbusier, Gerrit Rietveld, Walter Gropius, Ludwig Mies van der Rohe and Richard Neutra.
* Futurist and Utopian fashion, including suits, everyday and sportswear from Italy, Germany, Russia, France and the United States.
* An entire section relating to the “Healthy Body Culture,” including X-ray machines, films and photography.
* “Sitting on Air,” an installation of chairs, featuring the most radical and influential designs of the 20th century from such designers as Marcel Breuer, Ludwig Mies van der Rohe and Alvar Aalto.
* Life-size figurines from the Triadic Ballet by the German painter, sculptor and designer Oskar Schlemmer, who taught life drawing and theater workshops at the Bauhaus.

Works Added by the Corcoran Include:

Modernism: Designing a New World 1914-1939 is organized by the Victoria and Albert Museum, London. The Corcoran’s presentation is made possible through the generous support of Bernard and Sherley Koteen, the Lodestar Fund of the Community Foundation of the National Capital Region, Vornado/Charles E. Smith, Design Within Reach, the Dedalus Foundation, Inc., and The Solow Art and Architecture Foundation.