Engravings, woodcuts and etchings from the Collection of the Stadel Museum. A selection of 165 of the most important prints by one of the all-time great masters of the engraving. Aware of the importance of the medium, the man long considered to be the most eminent artist of the German Renaissance treated the engraving as an art form in itself, rather than a simple reproduction of other works. Curated by Martin Sonnabend. 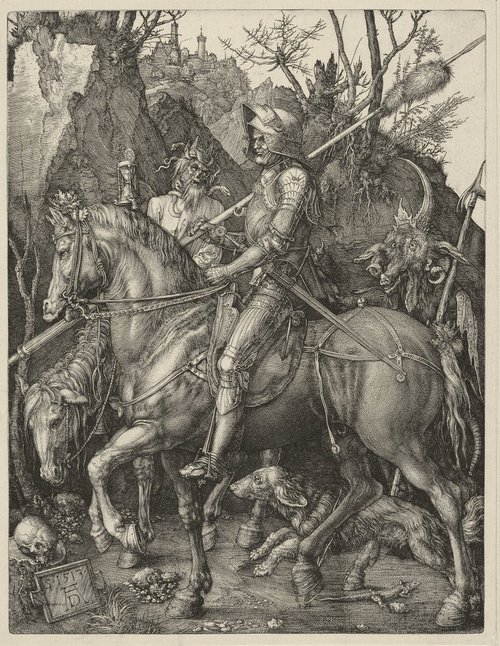 Prints from the Collection of the Stadel Museum

From June 26 to September 9, 2007, the Museum will be showing a selection of major prints from the extraordinary output of German Renaissance artist Albrecht Dürer.
The exhibition includes valuable engravings, woodcuts and etchings that give visitors the opportunity to absorb the supreme artistic and technical flair of the Renaissance’s great master of the engraving.
Accompanying the exhibition there is a complete educational area conceived to give visitors a general overview of some key features of the Renaissance and how they are reflected or dealt with in Albrecht Dürer’s work.

To mark its Tenth Anniversary, the Guggenheim Museum Bilbao presents Albrecht Dürer: Prints from the Collection of the Städel Museum, a selection of 165 of the most important prints by one of the all-time great masters of the engraving: Albrecht Dürer (Nuremberg, 1471–1528).
From the Collection of the Städel Museum in Frankfurt am Main, these extremely valuable engravings, woodcuts and etchings will be on display at the Guggenheim Museum Bilbao from June 26 to September 9 in what will be the biggest, most extensive showing of Dürer’s prints since the exhibition marking the 500th anniversary of his birth back in 1971.

Curated by Martin Sonnabend, this unique exhibition will be held in galleries 305, 306 and 307 on the Museum’s third floor. The sheer quality of the works gives a clear vision of the remarkable technical and artistic mastery of this stunningly talented painter, printmaker, draughtsman and theoretician in a range of disciplines. In the early 16th century, Dürer took the engraving to unprecedented heights of development and popularity.
Although Dürer produced paintings, drawings and prints throughout his career, it was the engraving that made his innovative art famous all over Europe. Aware of the importance of the medium, the man long considered to be the most eminent artist of the German Renaissance treated the engraving as an art form in itself, rather than a simple reproduction of other works.

Dürer became interested in the engraving and the woodcut—both techniques developed during the 15th century—in his formative years around 1940, when he realized that their potential for developing his own artistic ideas was greater even than that of paintings, particularly as most of his paintings were commissioned for specific, fixed locations such as churches, palaces and private homes. Drawings and sketches done by artists were usually considered to be preliminaries for paintings and were rarely seen outside the artist’s studio.

Dürer gave the same importance to engravings as paintings, and they soon became the artist’s main source of income. Agreements with traveling traders ensured his engravings were extensively distributed in a relatively short time, giving him immediate artistic influence in Germany and other countries, including Italy, where, in the latter half of the 16th century, Giorgio Vasari devoted long passages of his lives of Italian artists to Dürer.
His emergence as a modern artist would have been virtually unthinkable without the print. There were times, particularly around 1600 and during the period of German Romanticism in the early 19th century, when veneration of Dürer reached extraordinary heights. However, the idealization of Dürer as the supreme embodiment of German art also tended to distort the view of him and his work.
To a greater extent than is the case with any of his contemporaries, Albrecht Dürer’s work has been appraised and appreciated as an attempt through art to reflect and communicate social and spiritual values in an age of great change in German society, then beginning to feel the impact of the Protestant Reformation.
Dürer’s art synthesizes the late Medieval traditions of his country with influences from Italy, heavily marked by the inheritance of the Classical world and scientific knowledge. His work redefined the social and spiritual function of the artist within the context of humanist thought. Down the centuries, his works have retained their remarkable contemporary nature and have even influenced art in the modern age.

When Dürer came to work with prints, i.e. with images that could be repeated, the technique was still relatively recent. The first woodcuts and engravings appeared in the early 15th century as a fairly modest way of providing simple pious pictures or small illustrations originally for manuscript and, later, for printed books. However, it wasn’t until the last third of the 15th century that Martin Schongauer took the engraving to new artistic heights.
Son of a prestigious Nuremberg goldsmith, Dürer learnt the craft of cutting into metal—the basis of engraving—as a child, continuing his training as a painter in another studio in Nuremberg, which also specialized in woodcut illustrations for major publications. Apparently Dürer was equally at home doing engravings and paintings, and indeed became famous for his prints before gaining recognition as a painter. His earliest engravings and woodcuts, such as Hercules at the Crossroads and The Men’s Bath, have somewhat unusual themes and, with the line techniques available, achieved a figurative effect matching that of paintings.

The publication in book form of a series of woodcuts, Apocalypse, in 1498, shortly before the change of century, brought Dürer enduring fame.
His fascination with the human nude—something of a taboo in late Medieval Germany—comes from his first journey to Italy. Works like Adam and Eve explore the question of ideal proportions; he also became interested in geometry and ancient classical authors like Vitruvius and Euclides, an interest reflected in series such as The Life of the Virgin.
Although in the first decade of the 16th century he was kept busy with major commissions for paintings and in 1505/06 visited Italy for a second time, Dürer continued to produce prints. In 1511 he concluded the project, begun 15 years before, of the great series of woodcuts, publishing The Great Passion, The Life of the Virgin, a second edition of the Apocalypse and The Small Passion simultaneously. In 1512 he also published his only series of engravings, the Engraved Passion.
Subsequently Dürer produced no more series of this type, his publications of 1511/12 marking the end of his activities as creator and publisher of extensive series. In 1513 and 1514, in a definitive gesture perhaps comparable to the earlier one, he published what are known as his “master engravings”, Knight, Death and the Devil, St. Jerome in his Study and Melencolia. With these three works, Dürer is widely considered to have taken the engraving to new, hard-to-surpass heights of technical achievement.

However, fame did not cause him to abandon his interest in engraving and he began to experiment with new graphic techniques such as drypoint and etching. From 1512 on, he also worked for German emperor Maximilian I, for whom he produced over the years drawings and some huge woodcut projects, such as The Triumphal Chariot of Maximilian I, center of the representation of an enormous triumphal march, never actually completed. In his late period, Dürer also created the few portraits of princes and intellectuals he did as engravings.
Dürer spent most of the last eight years of his life on his theoretical writings on geometry, the construction of fortresses and proportions, which he also illustrated with woodcuts. The last of these, the Four Books on Human Proportion, appeared shortly after his death.

The Städelsche Kunstinstitut in Frankfurt am Main, or the Städel Museum, is one of Germany’s oldest museums. Its origins date back to the initiative of Frankfurt banker and collector Johann Friedrich Städel (1728–1816), who left his collections, his house and assets to the community, so that everyone would have free access to works of art. In his will, Städel stipulated that these works should be of the highest possible quality. Following his wishes, the Städel Museum collections continued to develop and grow in the 19th and 20th centuries. Today, as one of Germany’s leading art collections, the Museum’s gallery of paintings consists of 2,700 works from the Middle Ages to the present day, while the graphic arts collection has some 100,000 prints and drawings from the same period.
In all, Dürer’s oeuvre in prints comprises more than 100 engravings and some 280 woodcuts. The Graphische Sammlung at Frankfurt’s Städel Museum has excellent quality prints of almost all of them. Many of Museum’s works come from the collection created by Johann Friedrich Städel in the 18th century, while others are from a large collection acquired in 1819.
Including reproductions of all the works on display, the exhibition catalogue for Albrecht Dürer: Prints from the Collection of the Städel Museum also provides an introductory essay on Dürer’s prints and brief commentaries on prints and series.

To accompany Albrecht Dürer: Prints from the Collection of the Städel Museum, the Guggenheim Museum Bilbao has created Didaktika, a themed educational area offering an overview of the Renaissance: the interest in the classical world, the development of Humanism, scientific progress, social, political and religious changes, and documentaries, music, images, maps, graphics and interactive media providing visitors with the key concepts for understanding art in the period. Besides its exploration of the 15th and 16th centuries, Didaktika also provides information on the life of Albrecht Dürer and has a space reserved for workshops on the techniques this painter, engraver and essayist developed and used.

From June 26 to July 13, the Museum has organized an innovative program of activities for the children aged between 3 and 12 of Museum Members. It involves a series of workshops in Basque and Spanish that combine engraving techniques, illustration and storytelling giving a fun, imaginative introduction to the exhibition. Working as apprentices to a “master” engraver in a Renaissance studio, the children will be able to use simple techniques to make multiple copies of one image. They will also have the chance to write short stories about the art works and illustrate them with their own engravings.

While the exhibition lasts, visitors may throughout the day use different engraving techniques, while they are watched over by Museum supervisors in the workshop zone of the Didaktika room. In the year it celebrates its Tenth Anniversary, this latest Guggenheim Museum Bilbao initiative is designed to give the public a greater active, participatory understanding of art.