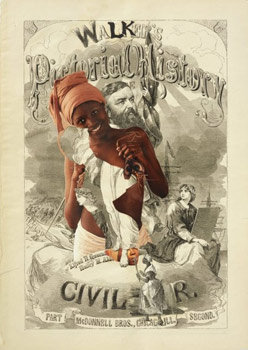 The first major monographic exhibition in Europe by Kara Walker (born in 1969), Mon Ennemi, Mon Frère, Mon Bourreau, Mon Amour takes us through the career of this artist, from the early cut-out silhouettes (1994) to the more recent animated films (2007).

Working around the topic of the history of slavery and its legacy in contemporary American society, she accounts for the relationships between black and white people, master and slave, segregation and its inherent contradictions. The artist depicts human violence, the theatrical one of national conflicts and the one of domestic abuse. Finding her inspiration in a diversity of sources – historical melodramas, popular romances, slaves testimonies, physiognomony –she counterbalances the American official history as propagated by cinema and literature.

Her large cut-out silhouettes stage the antebellum South, focusing on the complexity of unbridled imaginary world where fantasy and thoughts collide, on the relationship between the other and the self, on past, present and future. Through the persona of her alter ego "the emancipated Negress", free in a slave soul, Kara Walker runs across history as a disquieting and alert witness. Without Manichaeism or excessive militancy, she unfolds an art of unsettling questioning, often controversial. In her work, as in reality, the issue of discrimination and vulnerability is present under all its forms -- racial, social, or aesthetic. She presents a mesmerizing work about a past dramatically contemporary, through installations, films, collages and murals.

The exhibition presents a broad selection of works from 1994 onwards, opening with Endless Conundrum, An African Anonymous Adventuress (2001) -- a title echoing Brancusi's Endless Column (1938), Matisse‘s Danse (1931-33) – and its modernist interpretation of "primitivism".

Walker's drawings and collages -- especially Do You Like Creme in Your Coffee and Chocolate in Your Milk? (1997) and Negress Notes (1996-97) -- borrow from the 19th-century caricaturists. The Harper's Pictorial History series of 2001-05 tweaks the content of a history of the Civil War, in the process changing the book's title to Walker’s Pictorial History.

Inspired by shadow theatre and marionettes, the animated films -- Testimony (…), 2004, 8 Possible Beginnings (…), 2005 and …the angry surface of some grey and threatening sea, 2007 -- are reminiscent of such early filmmakers as Griffith or Reininger (The Adventures of Prince Achmed). The "puppeteer" -- the artist herself -- manipulates her characters.

While delving into the past, Walker's work remains thoroughly engaged with contemporary issues: "It's interesting that as soon as you start telling the story of racism, you start reliving the story," Walker says. "You keep creating a monster that swallows you. But as long as there’s a Darfur, as long as there are people saying 'Hey, you don't belong here' to others, it only seems realistic to continue investigating the terrain of racism."

Born in 1969 in Stockton, California, Kara Walker took her BFA from Atlanta College of Art in 1991, following up with an MFA from the Rhode Island Institute of Design in 1994. Since then some 30 of her installations and hundreds of drawings and watercolours have been shown in more than 40 solo exhibitions around the world. She took part in the 25th São Paulo Biennial (2002) and received the Deutsche Bank Prize in 2004. She is currently teaching at Columbia University, New York.