Falha. The artist manipulates urban spaces and architecture to intensify the tension between inside and outside, public and private, past and present. Her practice is a critical interpretation of how our built environment determines actions, behavior and social relationships, and by extension, society's dependency on the preservation of prescribed definitions of space, property and order. 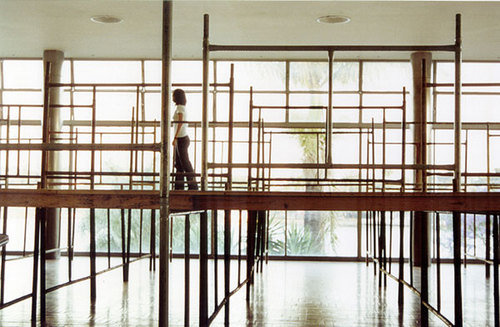 Renata Lucas manipulates urban spaces and architecture to intensify the tension between inside and outside, public and private, past and present. Lucas’s practice is a critical interpretation of how our built environment determines actions, behavior and social relationships, and by extension, society’s dependency on the preservation of prescribed definitions of space, property and order. The artist’s work imagines a space where these barriers break down, where the possibility of deconstructing boundaries might result in a different social dynamic. By offering an alternative spatial imagination—one that brings into consideration malleability, manipulation and play—Lucas provokes the possibility of new subjective and collective engagement within our built environment.

In her recent contribution to the São Paulo Biennial, Quick Mathematics, Lucas installed pavement, curbing and streetlights on top of the existing sidewalk, a subtle but concrete gesture of doubling that necessitated a consideration of the architecture of the street, one that promotes informal assembly, pedestrian transit, and unexpected obstacles, coincidences and pleasures. As Lynn Zelevansky observes in the exhibition catalogue: “Lucas is fascinated by the makeshift nature of Brazilian construction, the way buildings are adapted and then readapted until they no longer have a functional logic.”

For her Los Angeles debut, Lucas revisits the work Falha (Failure, 2003) an ambitious installation of hinged sheets of plywood that initiates a series of interactions with and reconfigurations of the site, thereby unleashing new expectations of the relationship between individuals and the space of the gallery. The exhibition is accompanied by a publication (forthcoming, August 2007) that documents the artist’s work and includes contributions by REDCAT acting director and curator Clara Kim, curator and critic Adriano Pedrosa, and Los Angeles County Museum of Art curator Lynn Zelevansky.

Born in 1971 in Ribeiro Preto, Brazil, Lucas has had solo exhibitions at the Galeria Millan Antonio in Sao Paulo, A Gentil Carioca in Rio de Janeiro, Castelinho do Flamengo in Rio de Janeiro and Museu de Arte da Pampulha in Belo Horizonte. She participated in the 27th Bienal de Sao Paulo in 2006. This year she will be included in exhibitions at Encontro de Medellan, Colombia; the Cisneros Fontanals Art Foundation, Miami; and the Tate Modern, London. Lucas received her BFA and MFA at the Universidade Estadual de Campinas. Lucas lives and works in Sao Paulo. This exhibition is made possible in part by the Nimoy Foundation and Ana Sokoloff. Additional support provided by R-23.