From Max Beckmann to Gerhard Richter 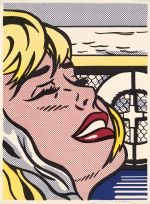 From Max Beckmann to Gerhard Richter

With its great maritime subject summer exhibition Sea Pieces - from Max Beckmann to Gerhard Richter, this year the Hamburger Kunsthalle presents a sequel to the successful first Sea Pieces exhibition, which in 2005, and for the first time in recent art history, brought back the long neglected genre of “maritime painting” into the public eye; and rightly so, since artists have always been fascinated by the vastness of the sea, its secrets and tales, by ships, harbours, coastlines, beaches and … beautiful women. Now the second part of this show gathers an impressive spectrum of 167 works by 55 international artists with an emphasis on the Classical Moderne, Pop Art and contemporary art currents, put on view in an unprecedented 1,700 m 2 / 18,300 sq.ft . exhibition area. In addition to well-known seminal works by Andy Warhol and Roy Lichtenstein, these Sea Pieces include compositions never or seldom before seen by the public, such as Paul Klee’s “Riverscape with Steamer”, Otto Dix’ “Farewell to Hamburg” and three works specially created for the exhibition by Anselm Kiefer.

In 1915 Max Beckmann wrote these words to his wife Minna: “If I were the Emperor of the World, I would claim as my foremost right the ability to spend one month every year alone on a beach”, thus describing an emotion that has united countless artists since time immemorial , namely their love of the sea. The fact that numerous carefully guarded art treasures are being made accessible to the public in this exhibition is due to the extraordinary willingness of more than 60 private collectors from Europe and overseas to lend us their paintings for this exhibition. As a result, visitors to the Hamburger Kunsthalle can now also see Paul Klee’s “Sea Garden”, last shown in 1950, next to his “Riverscape with Steamer”. Other jewels of the exhibition include 15 paintings by Max Beckmann and further works by Paul Klee, Lyonel Feininger and Max Ernst.

In addition to Warhol’s famous “Do it Yourself” sailboats, one of the key works of the Pop Art movement, we were also able to gather several central groups of works by Roy Lichtenstein, including some creations in Rowlux, a brushstroke painting, the lithograph “Shipboard Girl” and fivefilm works by the same artist, dating from 1969/70, and never before shown in Europe. Richard Hamilton, founding father of the English Pop Art scene, has contributed “Bathers II” from his private collection.

Anselm Kiefer , in whose work the sea has represented a central beacon since the late 1960’s, felt so excited by the concept of the exhibition that he offered the Kunsthalle several works from his studio in the South of France and additionally created three new pieces exclusively for Sea Pieces 2. The most impressive of his ten exhibits is probably a 2.5 tonne sculpture entitled “Verunglückte Hoffnung” [“Hope – the Casualty”], created specially for this exhibition and in which Kiefer makes allusion to Caspar David Friedrich’s “Sea of ice”, also often referred to as “The Wreck of Hope” in art literature.

The highlights of contemporary contributions also include the Gerhard Richter room, which for the first time gathers a substantial selection of his fascinating sea pieces. “ I just wanted to make it look a little nicer, because I realised how difficult it was to get both things at once, a good water surface and a beautiful sky to go with it”, said Gerhard Richter in 2002 about his paintings created at the end of the 1960s, in which he combined sky and sea to suggestive seascapes. Robert Longo on the other hand emphasises the destructive force of the sea with gigantic monster waves represented in large format charcoal drawings executed shortly before the 2004 tsunami disaster.

The young Hamburg artist T ill Gerhard, who together with Peter Doig and Daniel Richter is one of the actors of the new painting movement and who also contributed a work created specially for the exhibition, casts the sea as an eerie, foreign place whose depths harbour unexpected secrets and menace.

Among the photographic works selected, in addition to those of Elger Esser and Hiroshi Sugimoto, the compositions of Sven Johne and his role model Allan Sekula stand out by their political inspiration. Sven Johne, one of today’s most sought after young photography artists, takes a critical approach to the conditions of modern seafaring. With his camera, Sekula casts light on the deterioration of working conditions on container ships as a result of globalisation. “The sea is the scene of sporadic scares” , says the artist about his “View on the sea”, “as well as of short but unusual exertions that are miles away from the dramas of everyday life.” (Allan Sekula, 2002, in Seemansgarn [Seaman’s Yarn]).

Present-day video art is also represented in the Sea Pieces exhibition by first-class examples of the work of Bruce Conner, Tacita Dean and Hans Schabus. Bruce Conner’s 1976 film on the explosion of the first atom bomb on the Bikini atoll remains an item of contemporary interest. With this unsettling film, Conner, who was one of the first artists to start experimenting with film as a medium at the end of the 1950s, focuses on the sea as an experimenttal military battleground and on its endangered status as a sensitive component of our ecosystem. The young Austrian artist Hans Schabus, introduced by Max Hollein at the 2005 Venice Biennale, sees seascapes in Vienna’s sewer system. British artist Tacita Dean, currently honoured with a large individual exhibition at New York’s Guggenheim Museum, looks for phenomena and destinies at sea, as in her video “How to put a boat in a bottle” (1995).

Regardless of the techniques, media and resources used by the artists to approach the subject of the sea, the Sea Pieces exhibition clearly demonstrates that for all of them the sea is a central motif of life, yearning, but also of menace, and in all cases represents the point of departure for a commentary on their epoch. The subject of maritime painting, manipulated by the Kaiser Wilhelm II and the Nazi party for politico-military purposes, in fact represents much more than just kitsch and propaganda. The entire historical meaning of the sea is mirrored through the eyes of artists of the twentieth and the twenty-first centuries - the experiences of both World Wars, today’s consumer and industrial society, the sea as a traffic area and as an endangered ecosystem, an entirely transformed perception of nature and, all this notwithstanding, also the longing for the endless oceans and the hope for a better world.

The exhibition is complemented by an accompanying programme (contents and registration available at http://www.seestuecke-hamburg.de) and a comprehensive catalogue published by the Hirmer Verlag publishing house. The catalogue will be available from June 6 onwards at the Museum Shop or from http://www.freunde-der-kunsthalle.de for €29. As a parallel event, in its Fish & Ships exhibition the Kunsthaus Hamburg is showing other contemporary approaches to sea subjects .