The Mighty Quinn. The artist makes sculpture from readily available plastic objects and components with a constructivist spirit; fixing dinner plates and food containers amongst drainpipes and machine parts. 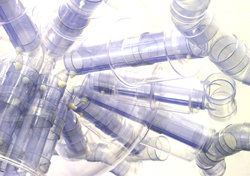 Poised within the white-out of the Gone Tomorrow Gallery is Stewart Gough’s sculptural musing on Bob Dylan’s ambiguous Quinn the Eskimo; most popularly known as Manfred Man’s #1 from 1968. A song charged with optimistic anticipation for the coming of a great Inuit figure; the embodiment of redemptive truth and indiscriminate, secular good.

Stewart Gough makes sculpture from readily available plastic objects and components with a constructivist spirit; fixing dinner plates and food containers amongst drainpipes and machine parts. Through deliberate use of size, scale, form, and graphical colour his works command presence, slipping between grounding utility and a fantastic flight through playful sculptural reference and architectural ideology.

For Gone Tomorrow Gallery, Gough has made a significant new work taking the natural six sided phenomenon of a snowflake as its formal essence. This fractal-like construction incorporates transparent materials to evoke a mobile, modular ice dwelling and elaborate driving mechanism held atop a ski and tracked snow-vehicle. In this instance, by means of ephemeral notions —and within the defining logic of the work— an intangible realm opens, of concept, or “will”.

Also on display are a series of ‘snow plates’, clear picnic plates drilled using holesaws into delicate snowflake patterns, floating on the gallery walls give context to The Mighty Quinn within a stylised blizzard. Not yet here -but speeding towards.