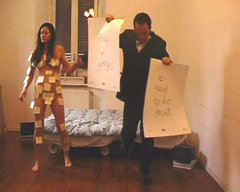 A major monographic survey of one of Australia’s most enduring and experimental partnerships. A Constructed World (Jacqueline Riva and Geoff Lowe) are known internationally for their ad hoc, responsive practice and for creating ‘happenings’ – spontaneous performances, conversations, dances and sit-ins.

“With ACW one is never sure when the work begins and whether it has finished, and those who approach it take the risk of finding themselves to be an integral part of the creative process.”
– French curator Charlotte Laubard.

Maverick Australian artists A Constructed World (Jacqueline Riva + Geoff Lowe) return home for a major survey exhibition at ACCA – and to reinvigorate the art of ‘happenings’.

In a program of events, forums and performances, a newly created, Melbourne chapter of the Complaints Choir (which originated in Helsinki) will sing a song full of woes, a flat-bed truck will trawl through the streets of Melbourne covered with ecstatic dancers and a series of open forums will discuss art, politics and more.

Sunday 3 June
3.00pm
PERFORMANCE: The Melbourne Choir of Complaints
A choir of singers and non-singers will perform a song full of complaints in the first installment from the Melbourne chapter of the Helsinki Complaints Choir http://www.complaintschoir.org/

Wednesday 6 June
4.30 – 7.00pm
CHANGE FORUM: Open Call Video Salon
Artists are invited to show their video works at ACCA, and have it discussed by a panel including an artist, a critic and someone from another profession.


Sunday 10 June
CHANGE FORUM: Collectivity
There are many artists working collaboratively and collectives practicing in Melbourne - who are they and what are they doing? Does this reflect a change in the way artists see their project? Are there any real benefits from or interest in collectivity or will temptations for the individual always override?

Wednesday 13 June
12.30 – 1.30pm
CHANGE FORUM: Publications Open Call
A Constructed World invite artists, writers, curators and independent publishers to present their publications to an audience at ACCA. (web magazines welcome in pdf format). Everyone will have a few minutes to show and discuss their project with the audience. People bringing material should arrive at ACCA at 12.15pm.

Sunday 17 June
3.00 – 4.00pm
CHANGE FORUM: We live in an environment of publishing without publishers.
A group invited by curator Rosemary Forde will look at self publishing, collecting artists publications and commercial art book publishing.

Sunday 24 June
3.00 – 4.00pm
CHANGE FORUM: Losers and Failure
What is the-role-in-culture for those who don’t get selected, accepted, chosen, acknowledged?

Wednesday 27 June
12.30 – 1.30pm
CHANGE FORUM: Politics and art in Australia
Are these overlapping fields, or separate concerns. Who is interested?

Geoff Riva + Jacqueline Lowe have been collaborating as A Constructed World since the mid 1990s, and are known internationally for creating ‘happenings’ – ad hoc performances, conversations, dances and sit-ins within (and frequently outside of) the gallery environment – often challenging or involving the audience.

Proponents of the movement pioneered by artists such as Yves Klein, John Cage, Allan Kaprow and others in the 1950s and 1960s, where a performance, event, situation or ‘happening’ became art, A Constructed World have explained contemporary art to live eels in Milan, held sleepovers at Basekamp in Philadelphia, and danced covered in post-it notes in their seminal Italian gallery space More Fools in Town.

They have also produced a body of work that includes drawings, paintings, sculpture and video. Increase Your Uncertainty is a major survey of these works, and will be accompanied by a series of events, performances and collaborations at ACCA and around Melbourne – ecstatic dances, ad hoc performances and forums about, amongst other things, the meaning and state of contemporary art in Australia.

“Increase your Uncertainty will be a major monographic survey of one of Australia’s most enduring and experimental partnerships. ACCA will be active with artistic spontaneity, while also creating an opportunity for reflection about A Constructed World’s evolving body of work,” said Juliana Engberg, ACCA’s Artistic Director.

“A Constructed World work with audiences and other artists to create an untidy, rambunctious practice devoted to emotional response and political positioning. They blur the boundaries between maker and receiver in inclusive, porous performance events. They let it all hang out…” she said.

Jacqueline Riva + Geoff Lowe split their time between Melbourne and Turin, where they operate the apartment artspace More Fools in Town with French curator Charlotte Laubard, running a series of exhibitions and events in a responsive, impulsive way.

They have been awarded residencies in New York and Paris, and have had works shown in biennales such as Gwangju (1995), Sao Paulo (1998), Tirana (2003) and the Emergency Biennale (05/06) and in exhibitions including Arte all’Arte San Gimignano (2000) and the Museum of Contemporary Art Sydney (1997-2000) as well as commercial galleries in Australia, Italy and New York. They were invited by the Guggenheim Museum New York to participate at the ARCO Forum ‘The Artist and the Public’ (2003) and the Guggenheim Bilbao forum ‘Shared Responsibilities’ (2006). They were inaugural ‘Artists in Residents’ at the Serpentine Gallery London (2002) and were in residence at Cite International des Arts in Paris (2005).