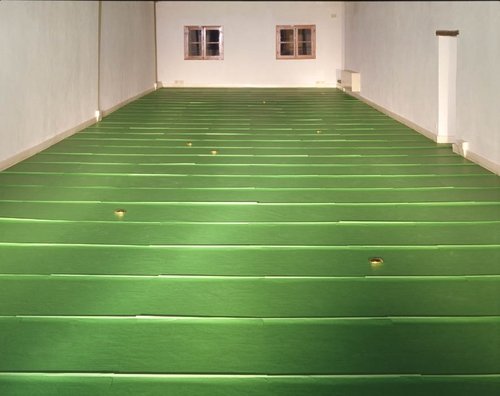 The presentation of a selection of works from the „la Caixa” Foundation Contemporary Art Collection at the Zachęta Gallery brings together a set of pieces belonging to, or close to, minimalist art.

Today the identification of minimalism as one of the main supports of contemporary art is not dictated, as it was in its beginnings, either by its condition as heir to the constructivist tendencies or its role in redefining the art object, but by its proven capacity to structure and construct specific places, spaces for the expression of heterogeneous ideas and experiences which constitute and describe the way we live in the world today.

To the process of paring down form, and a concretion and expansion of dimensions that are the distinguishing features of minimalism right from its origins through to its present permutations, we can add an apparently opposite phenomenon: the gradual occupation of empty space by biographical, social, even historical contents. Specific Places. Habitable Ideas observes the first guiding principle of the Collection: it is not a roll call of the great names of the history of contemporary art, but an interconnective dialogue between works selected both for their individual importance and their potential as interlocutors.

The exhibition also reflects another of the Collection’s fundamental criteria: it includes artists who were already recognized in the sixties and seventies – in this case, Donald Judd or Richard Serra – precursors of those who go on to make up the bulk of the Collection, but they are represented by pieces from the eighties or nineties, in other words, pieces contemporary with the Collection’s origin and chronological centre. One exception is Afrum Red, James Turrell’s magical installation from 1967, which closes the itinerary as a justification of the prolonging in time characteristic of these forms of art.

The pieces are organised in four individual and indeÍpendent rooms, whose sole common denominator could well be defined by Absalon’s video Proposition d’habitation (Proposal for a Room, 1991) placed in the small lobby at the entrance. It is an idea for an apparently bare, aseptic space for performing the acts of ordinary life, for filling the void at its core with an equally hollow parallel content.

The allusion to house and home is also found in a way in the confluence of pieces by Daniel Buren, Robert Therrien and Rodney Graham, which in their turn form the antechamber to the room with the greatest dimension of illusion, James Turrell’s. Once again the master notion is that of places as constructors of ideas.