The exhibition marks the Henry's 80th anniversary year by highlighting the major works acquired or commissioned by the museum since 1997. Rich in photographs, the exhibition also includes videos, installation, prints and paintings by an array of artists: Uta Barth, Sharon Lockhart, Josiah McElheny, Kori Newkirk, Wolfgang Tillmans, James Welling, and many others. The show touches upon the role of the camera as a mechanical instrument, conceptual agent, and compositional rejoinder in recent art. 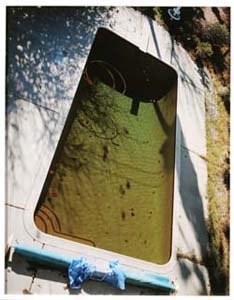 Through a series of "snapshots," Viewfinder touches upon the role of the camera as a mechanical instrument, conceptual agent, and compositional rejoinder in recent art. Suggestive groupings -- Frame, Focus, Exposure, Parallax, Cameraless and Voyeur -- scan a variety of ripple effects across recent artistic practices of all media. The exhibition casts a particular eye on the distortion of the camera's conventional operations in the artist's pursuit of striking images and deeper content.

Since photography's inception, our world has become an ever more visual culture, where deciphering media images is an increasingly important form of literacy. Viewfinder provocatively suggests that we see photographically and that contemporary artists assimilate the camera's mechanics as they compose technically and conceptually complex work.

Viewfinder marks the Henry's 80th anniversary year by highlighting the major works acquired or commissioned by the museum since it expanded in 1997. Rich in photographs, the exhibition also includes videos, installation, prints and paintings by an array of artists: Uta Barth, Sharon Lockhart, Josiah McElheny, Kori Newkirk, Wolfgang Tillmans, James Welling, and many others.

The Henry is unique in the Pacific Northwest as the sole collecting institution devoted to exhibiting and studying cutting-edge contemporary art.

Viewfinder is curated for the Henry Art Gallery by Associate Curator Sara Krajewski. Major support for this exhibition has been provided by the Paul G. Allen Family Foundation and the Mayor's Office of Arts and Cultural Affairs. Additional funding is provided by Norman Archibald Charitable Foundation, ArtsFund, 4Culture/King County Lodging Tax, and PONCHO.

About The Henry Art Gallery
Founded in 1927 on the University of Washington Campus, the Henry Art Gallery was the first public art museum in the State of Washington. The Henry engages diverse audiences in the powerful experience of artistic invention and serves as a catalyst for the creation of new work that inspires and challenges. The museum's exhibitions bring important works of art to Seattle from throughout the world and bring into public view works of art from the Northwest.

Mouth Open, Teeth Showing reveals the unique personality of the contemporary art collection created over the past dozen years by William and Ruth True, with its emphasis on younger artists, experimental formats, and new work. The exhibition features 13 major works, most of which have never been shown in Seattle. This exhibition includes video installations and video sculptures by Doug Aitken, Maria Marshall, Stephen Dean, Gary Hill, Jim Campbell, Bjørn Melhus, and Ann Hamilton, as well as a suite of prints by Australian artist Tracey Moffatt. Among these, Doug Aitken’s i am in you will have its U.S. premiere. Zoe Leonard’s monumental found doll installation inhabits the center of the exhibition – and also provides its provocative title.

Working in the last half of the 19th century, French-born photographer Jean (Juan) Laurent extensively documented the cities, landscapes, and people of Spain. This exhibition spotlights his images of the rugged terrain and majestic architecture of these ancient places as they entered the modern age. Drawn exclusively from the Monsen Photography Collection at the Henry Art Gallery, it will be a rare, in-depth look at this little known photographer.


As a celebration of the Henry Art Gallery's 80th Anniversary, admission to the museum is free through September 3, 2007.