Designed by the internationally artist Olafur Eliasson and the award-winning Norwegian architect Kjetil Thorsen will open in August. The Pavilion will act as a 'laboratory' every Friday night with artists, architects, academics and scientists leading a series of public experiments. The programme will culminate in an extraordinary, two-part, 48-hour marathon laboratory event exploring the architecture of the senses. 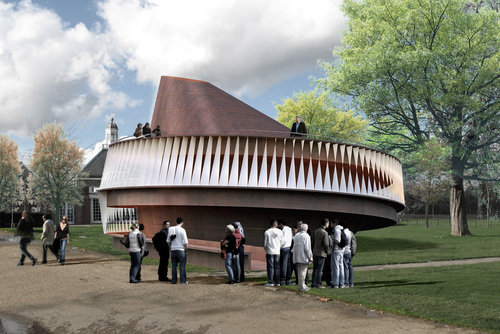 The Serpentine Gallery Pavilion 2007, designed by the internationally acclaimed artist Olafur Eliasson and the award-winning Norwegian architect Kjetil Thorsen, of the architectural practice Snøhetta, will open in August and remain on site until November 2007. This later than usual opening will allow the Serpentine to open the Pavilion in high summer and continue throughout the Frieze Art Fair and beyond.

The Pavilion will act as a ‘laboratory’ every Friday night with artists, architects, academics and scientists leading a series of public experiments. The programme, conceived by Eliasson and Thorsen with the Serpentine, will begin in September and culminate in an extraordinary, two-part, 48-hour marathon laboratory event exploring the architecture of the senses.

The Serpentine Pavilion 2007 is a spectacular and dynamic building. The timber-clad structure resembles a spinning top and brings a dramatic vertical dimension to the more usual single level Pavilion. A wide spiralling ramp makes two complete turns, ascending from the Gallery’s lawn to the seating area and continues upwards, culminating at the highest point in a view across Kensington Gardens and down into the chamber below.

Olafur Eliasson and Kjetil Thorsen said: “Our collaboration on the Serpentine Pavilion 2007 is defined by our mutual focus on the experience of space and on temporality as a constitutive element of spaces, private or public. We both work within a field of spatial experimentation that renders conceptual differences between art and architecture superfluous.”

Serpentine Gallery Directors Julia Peyton-Jones and Hans Ulrich Obrist said: “The Serpentine Gallery architectural commission is taking a step into the future by expanding the design team to include a visual artist, a format that began last year with a collaboration between Pavilion designers Rem Koolhaas and Cecil Balmond, with Arup, and artist Thomas Demand. This will bring an extra dimension to the project that already holds a unique place in the innovation of architectural practice.”

Danish-Icelandic artist Olafur Eliasson is based in Berlin where he established Studio Olafur Eliasson, a laboratory for spatial research. His work explores the relationship between individuals and their surroundings, as experienced in his awe-inspiring large-scale installation The weather project, 2003, at Tate Modern. Publisher of a new magazine that melds artistic and architectural experimentation, Eliasson is currently involved in numerous architectural projects such as the Icelandic National Concert and Conference Centre in Reykjavik (design of the building envelope).

He is collaborating with the Hirshhorn Museum and Sculpture Garden, Washington D.C., on a project that reconsiders the Museum's communicative potential, and he recently won the competition for a large rooftop extension at ARoS Aarhus Kunstmuseum, Denmark.

Kjetil Thorsen is co-founder of Snøhetta, one of Scandinavia's leading architectural practices, with offices in Oslo and New York. The Bibliotheca Alexandrina, Egypt, 1995 - 2001, is the commission that brought Snøhetta to international acclaim. Thorsen is responsible for the design of award-winning public buildings globally, and has collaborated with Eliasson several times, including The Opera House, Olso, currently under construction. He is a founder of Galleri Rom, Oslo, which focuses on the intersection of architecture and art, and is a member of the Norwegian Architectural Association (NAL) and the American Institute of Architects (AIA). He is also Professor at the Institute for Experimental Studies in Architecture at the University of Innsbruck, Austria.

The Serpentine Gallery Pavilion commission, now entering its eighth year, is an ongoing programme of temporary structures by internationally acclaimed architects and individuals. It is unique worldwide and presents the work of an international architect or design team who, at the time of the Serpentine Gallery's invitation, has not completed a building in the UK. The Pavilion architects to date are Rem Koolhaas and Cecil Balmond, with Arup, 2006; Álvaro Siza and Eduardo Souto de Moura with Cecil Balmond, Arup, 2005; MVRDV with Arup, 2004- (un-realised); Oscar Niemeyer, 2003; Toyo Ito with Arup, 2002; Daniel Libeskind with Arup, 2001; and Zaha Hadid, 2000.