Its genesis, evolution and history in the United States 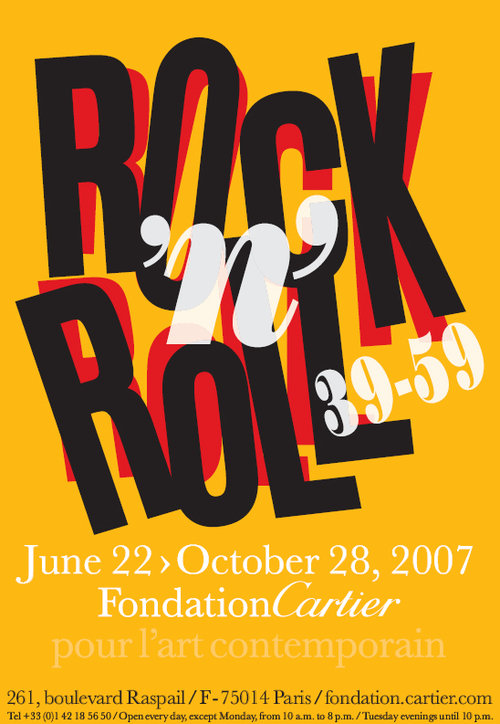 The Fondation Cartier pour l’art contemporain presents the exhibition Rock ’n’ Roll 39-59, an examination of rock ’n’ roll music, its genesis, evolution and history in the United States, from the explosion of boogie-woogie in 1939 to the events of the late 1950s that marked the end of the music’s first great era. With its priceless period posters, records, and rare objects, its photographs, films, and, of course, music and sound, this exhibition invites visitors to relive a key cultural phenomenon in American history, one that mirrored and drove a major social transformation whose heritage remains vibrantly alive today.
Along the way, the various genres that would become the main ingredients in the musical stew that is rock ’n’ roll, from blues and gospel to big band jazz to country and western and, especially, rhythm and blues are highlighted. Special focus is placed on the music’s pioneers, whether star performers like Bill Haley, Bo Diddley, Little Richard, Chuck Berry, and Elvis Presley, or behind-the-scenes practitioners such as the Sun Records founder Sam Phillips in Memphis and songwriter-producers Jerry Leiber and Mike Stoller.

Rock ’n’ roll burst into the consciousness of mainstream America with the stunning television appearances of Elvis Presley throughout 1956. His entirely new and free way of singing, uninhibited stage demeanor, and general outlook on life was shocking to a white middle class audience living in conformist, segregated, puritan, and prosperous post-war America. However, what seemed entirely new to this population had long been brewing in African-American culture, whose rhythm and blues from the 1940s provided early rock ’n’ roll with its freewheeling attitude and powerful rhythm.

For a short time, the major record companies co-opted the innovative music that was born in African-American culture with “cover” records, pale imitations of original rhythm and blues hits by conventional white pop singers. However, when disc jockeys such as Alan Freed refused to play these cover records and afforded radio play to the originals instead, there was no turning back. This is how rock ’n’ roll really broke through. A crossbreed of rhythm and blues and country music, it gave birth to a radically different sound that crossed musical boundaries as this genre’s white musicians thrived, paving the way for African-American artists within the mainstream. This new music was embraced by a new category of the population with high buying power that was emerging as an important force in American society: the teenager. By the late 1950s, countless musicians had adopted the genre, encouraged by the unprecedented success of Elvis Presley and other talented artists including Carl Perkins, Jerry Lee Lewis, Eddie Cochran, and Buddy Holly.

However, the end of the decade saw the decline of some of this movement’s most prominent figures: Elvis Presley served a hitch in the U.S. Army, Little Richard had forsaken rock ’n’ roll for religion, Buddy Holly died in a plane crash, and Jerry Lee Lewis was mired in the disgrace of a marriage to his 13-year-old cousin. Mediocre, pre-fabricated imitations of the original rockers had begun to flood the market. The golden age of rock ’n’ roll was over.

This is the story that Rock ’n’ Roll 39-59 tells. It places this musical phenomenon within the greater context of the social, cultural, and artistic developments of the day.
It thereby invites visitors to experience an important epoch of American life, a time in which the first stirrings of the Civil Rights movement coincided, not coincidentally, with the musical and artistic transformations of the post-World War II generation. They will be confronted with political players like Martin Luther King Jr., as well as emblematic figures of the creative impulse of the time: Marlon Brando, James Dean, or Jackson Pollock.

The exhibition is divided into two sections:
the first captures the essence of the era —the spirit of freedom and rebellion that was at the heart of the 1950s rock ’n’ rollrevolution—while the second portrays the genre’s history and chronology, tracing its roots and branches through the stories of its key people, places, and events.
It features priceless artifacts including a Buddy Holly guitar and a jacket worn by Elvis Presley during his last appearance on the Ed Sullivan Show. Rock ’n’ Roll 39-59 also displays rare period posters, such as the one advertising the concert that country star Hank Williams never lived to give.
The spirit of the times is captured by various vintage objects including a wall of jukeboxes, a 1953 Cadillac, and the recreation of a typical 1950s recording studio, as well as by the Pamela Page and Patrick Montgomery film Rock And Roll : The Early Days.
Finally, exceptional documents such as correspondences, contracts, and payment checks allow the visitor to discover the important personal and professional relationships that formed during this period.
A portion of the exhibition Rock ’n’ Roll 39-59 is devoted to photography, including a special exhibit of the photographs of Alfred Wertheimer, who accompanied Elvis Presley during the pivotal year of 1956.
The work of other important American photographers such as Bruce Davidson, Marion Post Wolcott, and Ernest C. Withers are also on view, as well as never-before-seen photographs by the great William Eggleston.

On the occasion of the 30th anniversary of Elvis Presley’s death, Rock ’n’ Roll 39-59 offers an aural and visual journey, inviting the viewer to re-experience the birth of a musical genre that, having shaken the foundation of American society, truly changed the world.

Nomadic Nights
The Nomadic Nights have devised an eclectic and surprising mix of events to honour the exhibition Rock ’n’ Roll 39-59, including: the music of Tav Falco, which powerfully evokes its Mississippi Delta roots; the left-field and very contemporary reinterpretation of rock hits by Matmos; a Buddy Holly lecture by Greil Marcus, the acclaimed writer on American pop culture; and the French National Air Guitar Championship in the Fondation Cartier garden. With this exciting program, the Nomadic Nights will truly say, “Hail, hail rock ’n’ roll !”

The Fondation Cartier pour l’art contemporain is planning a special event dedicated to the King on August 16 to commemorate the anniversary of his death.

Please visit fondation.cartier.com as of June 15 for details.

The exhibition Rock ’n’Roll 39-59 is organized with support from the Fondation Cartier pour l’art contemporain, under the aegis of the Fondation de France, and with the sponsorship of Cartier.