His series of hand-painted masks and murals celebrate the culture of Mexico, especially Veracruz. The evenings of August 2 and August 30 will feature musical performances by Villa-Lobos and his brothers. 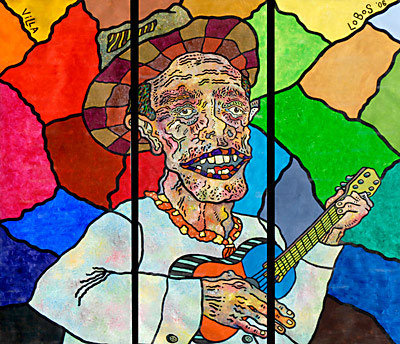 El Taller presents Murals, Music, and Masks of Mexico, the solo debut of Alberto Villa-Lobos, a young visual artist, painter, and musician from Veracruz, Mexico. His series of hand-painted masks and murals celebrate the culture of Mexico, especially Veracruz. The evenings of August 2 and August 30 will feature musical performances by Villa-Lobos and his brothers.

Drawing upon both his formal musical education and his grass-roots exposure to the visual and musical folk traditions of Veracruz, Villa-Lobos' works are as distinctive and intricate as his own life. His collection of masks draws upon politics, culture, and nature to form one unique body of work. "They could be considered a collection but also separate entities," says Villa-Lobos. One mask, "Marcos," gives tribute to the leader of an important revolutionary movement in Mexico. "Marcos is the public voice of the Zapatistas, a group of indigenous people fighting to be recognized. I admire his determination. He is a living legend in Mexico." The series of murals depict a trio of older musicians from Huasteca, a region of Veracruz, who play both violins and traditional "jarana" guitars. "I just loved the music they played and it's really beautiful to realize that the wisdom of their music comes from life and not from school." Villa-Lobos sees the theme of the exhibit as his own passion for native music and the life of Veracruz. "That's what I'm trying to communicate using pure bright colors. And to see my work and music together in one place will be a magnificent experience."

Villa-Lobos is also an accomplished violinist and musician. With his brothers he has performed at Carnegie Hall and at the 2006 Latin Grammy Awards. The brothers will perform again in special concerts to open and close the show. "We all are singer/songwriters and we have a nice mixture of traditional music and original songs," says Villa-Lobos, "a beautiful gift for everybody who attends the exhibition."

El Taller Latino Americano is a non-profit arts and education organization that seeks to bridge the distance between Latin Americans and North Americans through the language of art and the art of language. El Taller also offers conversation-focused Spanish classes.