Paradise Lost. The artist uses a combination of techniques including collage, Chinese ink and spray paint in his work, resulting in breathtaking artworks showing imaginary worlds on the brink of destruction. 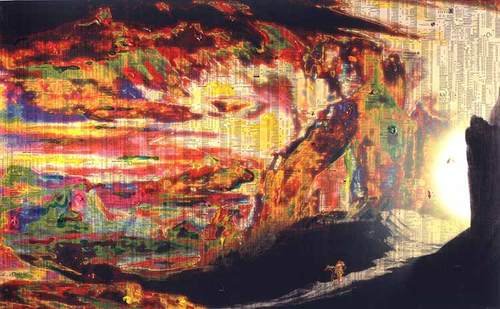 Selected by Susan May and Laing Art Gallery

Laing Solo is a series of exhibitions profiling the work of individual emerging artists. This exhibition was selected through an annual, national competition, open to artists in the early stages of their careers. Work was selected by representatives from the Laing Art Gallery and Susan May, former head of the Arts Council collection and presently director of White Cube gallery, London A contemporary artist who uses pages from the Financial Times to create dramatic virtual landscapes has been announced as the latest winner of the Laing Art Gallery¹s competition for emerging artists, Laing Solo.

London-based artist Gordon Cheung uses a combination of techniques including collage, Chinese ink and spray paint in his work, resulting in breathtaking artworks showing imaginary worlds on the brink of destruction. Cheung¹s work can be seen in the Laing¹s new exhibition, Laing Solo: Gordon Cheung ­ Paradise Lost. The exhibition includes 24 new works, which have never been shown before and have been commissioned by the Laing Art Gallery. Julie Milne, curator of the Laing Art Gallery, says: ³Laing Solo is a series of exhibitions which profiles the work of emerging artists, who are selected through a national competition. Gordon Cheung has been selected as one of this year¹s winners and we will be showcasing a selection of his work in a dramatic and

inspiring exhibition. Cheung¹s work often includes references to popular culture, with Scooby Doo characters and characters from popular films appearing alongside images from mythology, iconic paintings, magazines and the internet. His latest work focuses on themes of destruction and disaster and is inspired by the work of British 19th century Romantic artist John Martin, whose paintings can also be seen at the Laing Art Gallery. John Martin became famed for his dramatic scenes, such as The Destruction of Sodom and Gomorrah, on show in the Laing¹s 18th and 19th Century Gallery. Cheung was particularly drawn to Martin¹s Paradise Lost print series, published originally as illustrations for the poem by John Milton. Cheung explains: I felt I could re-translate John Martin¹s Paradise Lost series into a contemporary and relevant context. The idea that we are losing, or certainly becoming increasingly urgent with, our relationship to Earth is compelling and to use an archetypal story as a means of understanding our era attracted me a great deal.