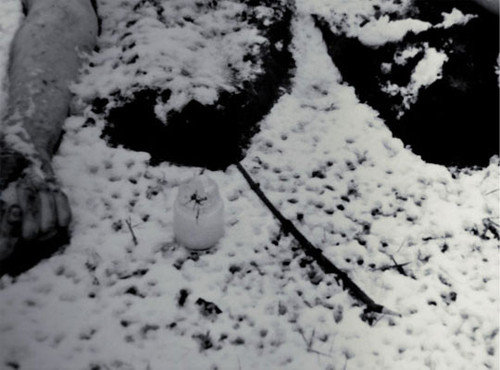 Emily Tsingou Gallery is pleased to announce Henry Bond's fourth one-person exhibition with the gallery. In his most recent body of work, Bond continues his interrogation of photographic signification, Psychoanalysis and representations of the everyday. Each image in the show is a re-photographed detail of original crime scene documentation held in the British National Archives. These close-ups catalogue the banal details of day-today life in 1950s England. A coffee tin or wallpaper pattern seem strangely familiar, perhaps not from personal experience but rather a remembrance of film or other visual motifs from popular culture.

The familiarity of these images references a collective subconscious, but within these scenes of domesticity lies an interruption of the quotidian. Each of the seemingly benign details is actually part of a larger room or space, in which a corpse was present. Excluding the harrowing image of violence from view, Bond's work instead scrutinises incidental details - hair pins, newspapers folded on a chair, biscuits arranged on a plate - as crucial entry points to understanding the dynamics underpinning the crime scene. Just as Psychoanalysis excavates meaning through anomalies, 'slips', or details which index the subconscious, Bond's photographs, like a criminologist's investigations, pursue underlying meaning through residual traces of preceding actions or events.