Art for Magasin 3 - This Fall, the Konsthall marks 20 years of exhibitions open to the public. Throughout this period numerous artists have created works specifically for Magasin 3. These works, which are an integral part of the collection, will now have the opportunity to be on view. Some memorable pieces can be revisited in the same exhibition as the never-been-seen new additions. 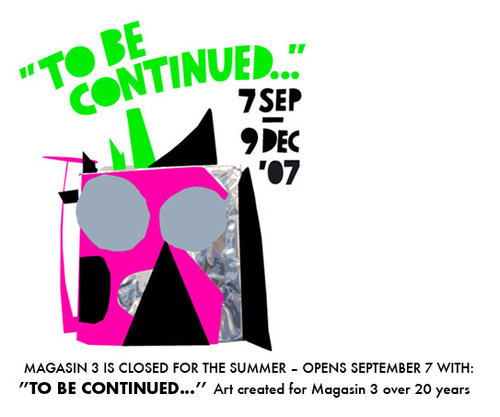 The title of the exhibition highlights the future. We have always collaborated intimately with the artists in creating new works - that is at the heart of our work.´´
David Neuman, director Magasin 3 Stockholm Konsthall

This autumn, Magasin 3 will have been open to the public for 20 years. For 20 years, we have been producing exhibitions. Many artists have created works specifically for Magasin 3. Now these works will be shown together! See old favourites again, see old works in new versions or new works for the first time. Outside, Matti Kallioinen (Sweden) will create a new work inspired by fairytales.

The team of curators at Magasin 3 - Sara Despres, Richard Julin, Sara Källström, Elisabeth Millqvist, David Neuman, Tessa Praun - have jointly put together the exhibition, which will fill the entire gallery. Prepare for a season packed with events, fantastic speakers and performances. The exhibition focuses on the characteristic approach of Magasin 3, with long-standing and close collaboration with the artists. This is unique on Sweden´s art scene.

Magasin 3 Stockholm Konsthall was founded 1987 and is one of the leading institutions of contemporary art in Sweden. Since its inception Magasin 3 has become recognized for major exhibitions presenting works by internationally established artists.