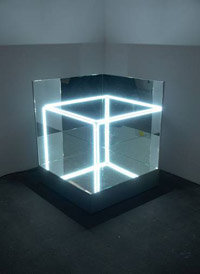 SculptureCenter is pleased to present Illusion, a solo exhibition by Jeppe Hein. Illusion will be on view September 9–November 25, 2007 with an opening reception on Sunday, September 9, 4–6 pm. Hein will present a major new work, 360º Illusion, created specifically for SculptureCenter's dramatic central space and four works from the series, Modified Social Benches. Hein's work focused on problematizing the traditional relationships between sculpture, viewer, and environment. Illusion is produced through SculptureCenter's acclaimed Artist-in-Residence program.

360º Illusion is comprised of two mirrors, each approximately six by fourteen feet, connected at a 90º angle and hung from the ceiling. Initially, the installation mirrors its surroundings and dissolves into the space. However, the double reflection, produced by the two connected mirrors, creates a reflection within the reflection and as the mirrors slowly rotate, the two reflections appear to rotate at different speeds. 360º Illusion directly subverts and displaces the physical and psychological experience of the viewer, simultaneously addressing the limitations as well as the possibilities inherent in the act of looking.

Accompanying this major new commission will be a selection of four sculptures from Modified Social Benches installed in SculptureCenter's courtyard with an additional piece placed in Court Square Park. While 360º Illusion is an excellent example of Hein's exploration of the phenomenon of perception, the benches stem from his consideration of social space and the way in which the physical environment shapes one's behavior. These sculptures, Hein's most recent exploration of the form and context of the park bench, present impossible seating structures. One is a circular bench, another has a seat that appears to have melted and dropped to ground level, another has legs that arch so that the seat is actually upside down and the back of the bench is touching the ground. While playful, these works invite us to consider an altered perspective on landscape and public space. Modified Social Benches I in Court Square Park is presented in cooperation with the New York City Department of Parks and Recreation in conjunction with Art in the Parks: Celebrating 40 Years: 1967-2007.

SculptureCenter is proud to present new works by Nina Lola Bachhuber, Richard Bottwin, Edward Kihn, Paul & Wilkin, Cesare Pietroiusti, Willoughby Sharp, Nolan Simon, Elisabeth Smolarz, Mary Ellen Strom & Ann Carlson in the tenth installment of In Practice. These works are commissioned through SculptureCenter's In Practice project series, which supports the creation and presentation of innovative work by emerging artists. The projects are selected individually and reflect the diversity of approaches to contemporary sculpture. The exhibition will be on view September 9–November 25, 2007 with an opening reception on Sunday, September 9, 4–6pm.

Nina Lola Bachhuber's "combine sculptures" adopt the formal-symbolic language of surrealist sculpture while toying with post-minimalist registers of form and incorporating a wide variety of media such as mirrors, fabric, metal, aluminum foil, vinyl tubing, hair, fur, and in some cases, drawings on paper. Fausse blonde (2005) and Ottomanne emprisonnèe (2006/7) are strongly connotative and narrative pieces that flirt with 19th century romantic genres while retaining critical dimensions ranging from evocative to potent, and controlled to pugnacious.

Richard Bottwin's sculptures fold, hinge, and spring off the wall, creating a staccato, playful movement. Constructed out of plywood, the surfaces are detailed with directional wood grain or painted with bright acrylic colors. Each piece reveals surprising shapes and patterns based on a modernist repertoire that shift according to the viewer's perspective. A sense of disorientation, implied weightlessness, and the element of surprise enliven the reductive forms and counter the modernist vocabulary of the constructions.

Edward Kihn's multi-channeled video Minutes from a Counter-Revolution (2007) presents an array of found films dating from the CIA's 1954 coup to topple the Arbenz administration in Guatemala. Models of time and space develop alongside cinematic and photographic technologies, within the context of political strategy and doctrine. Disparate points of connection enlighten the conceptual choices of the work: from the philosophy of one of Guatemala coup's architects, John Foster Dulles, to his tutelage under Henri Bergson, to Bergson's riposte against cinema for its discrete, fragmentary re-composition of time, to Eadweard Muybridge's photographic tour of Guatemala in the 1870's.

Paul & Wilken present four collaborative paintings: The Thief, The Slayer, The Conqueror, and The Barbarian (2007). These new works entertain a devious relation to the genre of bad painting, appropriative strategies, and aspects of German and US post-war art, while expressing a scathing critique of masculine gestural painting and subject matter. Like a double-edged sword, the hubristic, adolescent excess contained in the works paired with the whole-hearted, engagement of the artists towards the execution of their subject seem to unabashedly celebrate the very tropes they might engage with. Tantalizing and comical, the works play with levels of tolerance and indulgence within the viewers.

Cesare Pietroiusti's artistic practice articulates a critique of authority and institutions, property, and value as assigned by systems of power. Petroiusti deals with these concerns through an array of different tactics, from gestures engrained in everyday life, to the elaboration and participation in alternative modes of organization. Untitled (2006) was filmed at midnight on April 30, 2006, the deadline for the eviction of squatters living in the Angelo Mai social center and former convent in Rome. In this film the artist demolishes a wall located at the end of an underground tunnel to reveal what may lie beyond the layers of architecture. Pietroiusti will also perform Forgotten Sculptors in collaboration with Emilio Fantin, Joan Jonas, Luigi Negro, and Giancarlo Norese on Saturday, November 3, 2007, 3pm as part of SculptureCenter's participation in PERFORMA 07.

Willoughby Sharp might have best described his approach when declaring, "I am an information artist". His new installation Then & Now (2007) offers an insight into multiple works, installations, and interventions by Sharp co-edited with Pamela Seymour Smith, and spanning over forty years of cultural production: from the elaboration of Avalanche Magazine in the early '70s to recent developments in Sharp's personal life and work. While making a brutal statement about the non-linearity of time, Then & Now functions as an apparatus calibrated to demonstrate the inescapability of life, the self, and the human gaze.

Nolan Simon reduces strategies of representation to a minimum despite the potential connotative content of his chosen materials. Found and made elements are juxtaposed and mingled until they reach a state of balance and equivocal equilibrium within formal arrangements. By focusing on the how rather than the what, any potential meaning attributed to the work wanders from object to object, from one arrangement to the next. The work confers a deference toward iconoclasm, a bias towards cheap, found materials, and a concrete approach to abstraction.

Elisabeth Smolarz began The One Hundred Dollar Project in 2006. Articulated as a series of case studies that led the artist to collaborate with communities of people from Beijing, New York, and Berlin. The piece begins with the question, "How many people can be hired for $100?" The work's engagement with labor theory or systems of exchange-value may seem inconclusive, but what emerge are the structures of informal relations among participants. In addition, the participants' awareness of the camera lends insight to the most minimal degree of performance.

Four Parallel Lines, 2007, is a video installation made in collaboration by artists Mary Ellen Strom and Ann Carlson and four men who work as day laborers: Jose Bautista, Joel Gomez, Lisandrow Vicente, and Carlos Hernandez. Four parallel lines are drawn on a stretch of beach using 6" x 2" lumber. The ocean eventually washes the workers' line drawings away. References to earth works and other art historical genres are deployed to give focus to the lives of immigrants and their labor within an immersive, physical experience.

Thanks
In Practice is supported in part by a grant from The Jerome Foundation, JPMorgan Chase, and The Cowles Charitable Trust.

Scott Lyall's artistic practice is grounded in research into the relationships between graphic processes, sculptural display, and the design legacies of conceptualism. He has pursued experimentation through works on paper and in writings, as well as large-scale exhibitions featuring work in various media. Most recently, his work has focused on forms of performance notation, and the transformative layers imposed on works of art when they are documented.

For his exhibition at SculptureCenter, Lyall's point of departure was a collaboration with the New York-based dancer and choreographer, Maria Hassabi. Hassabi approached Lyall about collaborating on a new dance performance after seeing an installation of his work in 2006. Having little knowledge about the conditions and criteria of current dance, Lyall reviewed a set of videotapes made by Hassabi at her rehearsals, eventually transposing the information into figures and linear diagrams. These diagrams traced a map of the shape of the dance performance and were used to design a set of elements that could be placed on stage as visual marks for the dancers.

The installation at SculptureCenter transposes elements of Lyall's set design to the more specific discursive conditions of the contemporary art gallery. Notably, the work has been separated from its performances; its functions of mapping and marking the dance space have become opaque, or perhaps dormant. There is a sense that dance and sculpture enjoy two different temporalities that lack equivalencies, interacting instead to perform the limits of each other. The artist also incorporates a video monitor that provides light for the installation, by displaying color gradients "grabbed" from details of a videotape by Hassabi. These animated color shifts are remnants of refracted light from her dance leotard, as recorded during a 2006 rehearsal workshop in Moscow. Just as Marcel Broodthaers defined his exhibitions as decors in order to refer to theatre sets and set theory, Lyall works with the differences between fragments and complete sets, designing an abstract re-collection in both sculptural and graphic languages.

During the little contemporaries Maria Hassabi's Gloria will be performed at Performance Space 122, between November 17 and 21, 2007. Components of Lyall's exhibition will become new elements in the set for this iteration of Gloria. During this period at SculptureCenter documentation will explore the work's absence. After Gloria's duration at PS122 the components will return to SculptureCenter.

Scott Lyall received his MFA from California Institute of the Arts and has exhibited internationally since 1996. His most recent exhibitions include When Hangover Becomes Form, with Rachel Harrison at Contemporary Art Gallery, Vancouver and LACE, Los Angeles, in 2006; and a dancer dances at Miguel Abreu Gallery, New York, also in 2006. Upcoming projects include solo exhibition at Sutton Lane, London in 2008 and a group show at the Weatherspoon Museum in Greensboro, North Carolina in 2008. Lyall was born in Toronto, Canada, where he currently lives and works.

Image: a work by Jeppe Hein