The exhibition presents a selection of 17th century manuscripts, both Christian and talismanic, magic scrolls painted with fantastic demons and crosses in metal and wood. 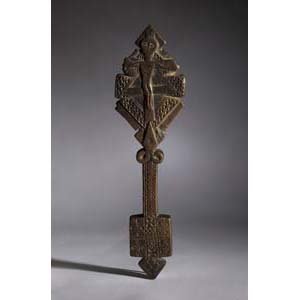 Sam Fogg, the world’s leading dealer in Ethiopian art, will stage the first selling exhibition of Ethiopian art in Paris, at Galerie Daniel Besseiche, 33 rue Guénégaud, from Wednesday 12 to Sunday 16 September 2007 as part of the sixth Parcours des Mondes, the world’s leading primitive art event. Fogg will show a selection of works representative of the rich and varied culture of Ethiopia including ancient manuscripts, magic scrolls and carved crosses in metal and wood, dating from the Zagwé dynasty in the 13th century to the 19th century. Magic and Faith: Ethiopian Art will be Fogg’s fourth exhibition of Ethiopian art and follows the highly acclaimed Art of Ethiopia, staged at Pace Primitive in New York in 2005.

Fogg is delighted to be exhibiting Ethiopian art for the first time at Parcours des Mondes alongside art from Africa, the Americas, Asia and Oceania. The great unknown culture of sub-Saharan Africa, the art of Ethiopia has been mostly ignored by scholars until recently. However, the study of and enthusiasm for Ethiopian art is growing. Ethiopia holds a unique position as an ancient Christian culture in the horn of Africa, surrounded by tribal and Islamic communities. From early on it had a strong artistic language, receptive to a broad range of outside influences which were assimilated and transformed into its own distinctive style.

The origins of the civilisation of highland Ethiopia lie in extreme antiquity with roots in both ancient Africa and the pre-Islamic world of southern Arabia. Attracted by Ethiopia’s natural wealth and its position on important trade routes between Africa, the Mediterranean and the Orient, colonists from southern Arabia introduced writing, stone architecture and kingship. The immigrants integrated with the indigenous population resulting in a distinctively Ethiopian civilisation and by the end of the 3rd century AD the kingdom of Axum, now part of Eritrea and northern Ethiopia, was, with Rome and Persia, one of the three great powers of the ancient world. Christianity was adopted as the state religion in the mid-4th century, linking Ethiopia culturally and politically with Byzantium and the eastern Mediterranean. In the early Medieval period there was considerable contact with Christian communities in Egypt and Syria and later traces were left by Judaic and Arabic invasions.

The exhibition will include manuscripts both Christian and talismanic, magic scrolls painted with fantastic demons, and crosses in metal and wood. The earliest piece in the exhibition is a cast bronze processional cross, dating from the Zagwé dynasty, probably from the 13th century and therefore extremely rare. A winding interlace pattern creates a cross shape with smaller crosses surmounting each arm and horn-like extensions beneath. This design is associated with King Lalibela (c. 1185-1225) who is credited with building the eleven famous rock-hewn churches in the Lasta mountains.

During the 15th century the highlands of central and northern Ethiopia saw a magnificent flowering of the arts. Great advancements were made in literature, manuscript illumination and panel painting as well as in metalwork. Fogg’s exhibition will include some excellent examples of the metal crosses produced in that period, which demonstrate that the skills of the craftsmen were equal to any elsewhere at that time. These will include a cast bronze processional cross with an interlace pattern encircling smaller crosses, one of the finestexamples of its type. Another superb example is a brass cross with a panel in the centre decorated with an incised figurative design of Christ with a disciple on one side and the Virgin and Child flanked by archangels on the other. It reflects the influence of Italian artists, a number of whom settled in Ethiopia in this period including the Venetian artist Nicolò Brancaleon, who introduced western traditions of figurative art.

Most of the works dating from this period were destroyed during the Muslim invasions of the 1530s. However, stability was re-established under the later Solomonic dynasty, beginning with King Fasilädäs (1660-82), and Gondar was made the capital. The arts saw a period of regeneration and a revival took place which drew on earlier traditions, developing and transforming them into a dominant new style. The exhibition will include a group of 17th century wood hand crosses carved with various patterns and shapes. Characteristic of these is a type of interlace ornament which imitates a style developed by the Stephanite monks in the late 15th century.

A selection of 17th century manuscripts will be on display, including a large folding book with wild and dynamic painting which has parallels with mainstream 17th century styles, but must have originated somewhere remote from the court. (fig. 5) Another large folding book from Lasta depicts the Lastan king and Saints Lalibela, Harbé and Yemreha while the name of the donor and the scribe, Zesellasé and Atnatyos, are recorded.

Collectors will be fascinated by a number of ‘magic’ (talismanic) manuscripts and scrolls. The latter are typically made up of three strips of parchment joined together and painted with fantastic gorgons’ heads, protective angels, magic diagrams placed amongst prayers and spells, written in Ge’ez in vertical columns. These were intended for healing and protection against demons or to ward off troubles such as colic, chest pains, foreigners and the evil eye, as well as providing prayers for pregnant women and suckling infants. They were believed to have healing properties when wrapped around the body of the owner.

Sam Fogg is one of the world’s leading dealers in Medieval art, both Western and Oriental, encompassing manuscripts, miniatures, sculpture, ivories, enamels, stained glass and small precious objects. He also deals in Islamic manuscripts and paintings, Indian miniatures, Asian miniatures, Chinese and Japanese books, Islamic objects as well as in the unusual fields of Ethiopian and Armenian art. In 2001 he held the first ever selling exhibition of Ethiopian art in London which was widely acclaimed, and has since sold Ethiopian works to the Musée du Quai Branly, Paris, the British Library, London, the Metropolitan Museum of Art, New York, the Art Institute of Chicago, the Detroit Institute of Art and Walters Art Gallery, Baltimore, as well as to many private collectors. Magic and Faith: Ethiopian Art will offer the French public the opportunity to admire and acquire rare treasures from one of the world’s most ancient civilisations.