The characters depicted in Sendor's paintings, such as children, elderly couples and family groupings, buttoned up in Victorian dress, are carefully lifted from late 19th century and early 20th century photographic studio portraits found by the artist in flea markets and antique shops. 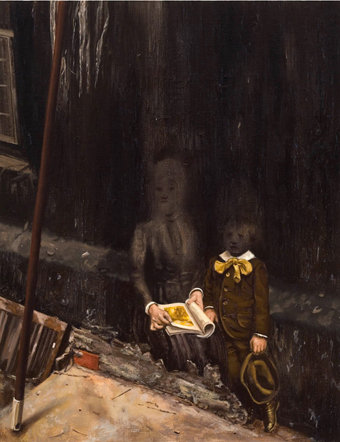 Mogadishni Cph is very proud and pleased to present the first solo exhibition in the gallery by the American artist Andrew Sendor, who lives and works in New York. The show is comprised of new paintings, all oil on linen, which comfortably fit into Sendor's intricately detailed and highly mysterious universe, where inner and outer landscapes co-exist. The paintings were created partly in New York, as well as during his one and a half months stay at The National Workshops for Arts and Crafts at Gl. Dok in Copenhagen. A productive and inspiring stay, that he has been granted by The National Workshops for Arts and Crafts, Denmark.

In an extension to Sendor's previous works, this current series of paintings embraces a sprawling visual language concentrated on re-inventing conventional imagery - particularly imagery that is often synonymous with realist figurative painting, as well as typical genres and -ism’s that are commonly found in the history of painting. The idea of process and representation morphing into one meaning - where the surface of each painting reveals both symbolic and formal content is central to the current body of work.

The characters depicted in Sendor's paintings such as children, elderly couples and family groupings, buttoned up in Victorian dress - are carefully lifted from late 19th century and early 20th century photographic studio portraits found by the artist in flea markets and antique shops. The landscapes in which they are often inserted - forests shrouded in darkness or open ominous skies - are themselves borrowed from postcards, books or travel photographs. Together they create fascinating montages in which different temporal and geographic levels collide.

The manner in which Sendor paints introduces another intriguing aspect of his artistic practice. His human subjects are brought back to life in precisely the same manner that a portrait would have been painted at the time they were originally captured on film. Beneath their sharp, quasi-photographic detail, which makes no attempt to hide the paint on its surface, lies the landscape, a semi-realist wonderland in which suddenly the brushstrokes are barely visible. This mix of tonalities and textures reveals Sendor's interest in the history of process within the practice of painting, and by extension in the evolution of portraiture. Sendor does not set out with the express intention to revise painting. Rather, with an educated consciousness of the work of his predecessors and the debates that have swirled around contemporary art in recent years, he formulates his own visual language and with it a distinctly personal sensibility.