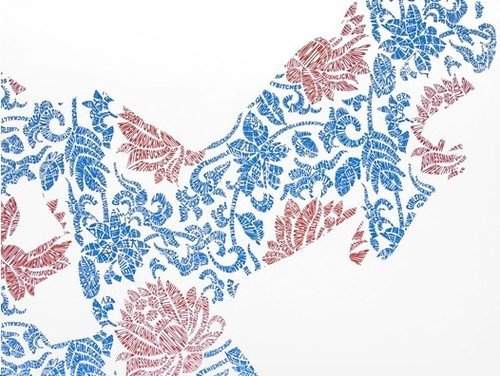 New York, NY, August 27, 2007 — Yvon Lambert New York is pleased to announce the gallery’s first exhibition of work by Hong Kong-based artist Tsang Kin-Wah. A selection of his new works will be on view at Yvon Lambert New York Project Space, West 25th Street from September 14 through October 6, 2007, and is open Tuesday through Saturday from 10 am to 6 pm.

The exhibition will consist of floral patterns of text and paintings mingled with rhythmic pulses of light. Transparent, glossy text cut outs contain Tsang’s thoughts on issues such as racial discrimination and terrorism, and are arranged around the front gallery’s walls, beams and floor. Tsang employs text, painting and lighting to create work that relates to our contemporary environment, at once exposing and obscuring the strains of anger, fear and extreme emotion that run through it.

Patterns of light create tensions of visibility and invisibility, evoking the emotions that are present in our surroundings, often unseen but palpably felt.
The walls of the second gallery have been covered with traditional Chinese lotus patterns in soothing blue and pink, a pattern that repeats in accompanying paintings. While the lotus flower is closely associated with Buddhism in the East to symbolize purity, upon closer inspection Tsang’s flowers spell out pornographic texts.

The language itself is abstracted and concealed in the cartoonish manner in which it is often seen, leaving little distance between the “dirty” and the “pure.” Tsang questions the concealed and revealed nature of society through a visual relation to environment, where the viewer may simultaneously act as voyeur and explorer by observing private space.

TSANG Kin-Wah (b.1976) was born in China and is a graduate of the Chinese University of Hong Kong and Camberwell College of Arts at the London Institute. Tsang participated in various group exhibitions such as Reversing Horizons (Museum of Contemporary Art Shanghai, Shanghai), You Cannot Clone It, But You Can Buy It (ArtChina Gallery, Hamburg), Art Fair Tokyo 2007 (Tokyo), Good/Bad_ (Museum of Dostoevsky, St. Petersburg), The State of Things (National Museum of Art, Architecture and Design, Oslo), 30x30 (Vertigo Gallery, London), Hong Kong Art Biennial (2001, 2003, 2005), and has been presented in the solo exhibitions Space – Installation Exhibition by TSANG Kin-wah (Room With A View, Shanghai, 2004), White Cube (John Batten Gallery, Hong Kong, 2005), and Showcase: Tsang Kin Wah (Art-U Room, Tokyo, 2006).
He is a recipient of the Hong Kong Art Biennial’s 2001 Prize of Excellence, the 2005 Sovereign Asian Art Prize, the 2007 Tokyo TDC Prize and his works are found in key collections worldwide, including the Sovereign Art Foundation, Museum of Design, Zurich, the Camberwell College of Arts, London, the Hong Kong Museum of Art, and the Hong Kong Heritage Museum.