Paintings. Inspired by Abstract Expressionism, he created dynamic works noted for their raucous colors and density of gesture, combined with emotionally complex meditations on Martin Luther King, the Civil Rights Movement, and the Vietnam War. 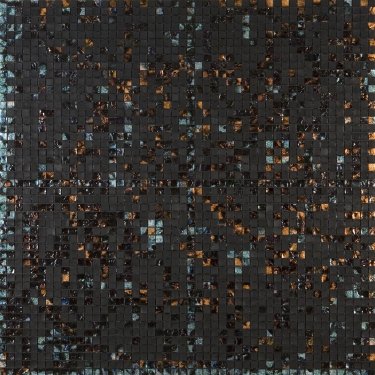 New York-based artist Jack Whitten's experiments with painting date to the 1960s, when, inspired by Abstract Expressionism, he created dynamic works noted for their raucous colors and density of gesture, combined with topical content—emotionally complex meditations on Dr. Martin Luther King, Jr., the Civil Rights Movement, and the Vietnam War. In the 1970s, Whitten's experimentation turned to abstraction, when he developed a method of painting that he related directly to photography. In this work, gesture was removed from the making of the work; instead, paint and canvas were "processed", using large troughs to hold paint, and dragging canvas across, with squeegees, rakes, Afro combs to create surface texture, line, and voids.

The 1980s saw further experimentation with paint as a metaphor for skin, with Whitten "casting" surfaces and textures with acrylic paints and compounds. These works reintroduced gesture with aspects of sculpture and collage at a time when narrative-based and didactic work was de rigeur for Black artists. In the 1990s, Whitten's experiments with paint as a medium moved further towards sculpture, as paint compounds were transformed into mosaic-like tiles and were applied to canvases, referencing ancient architecture and murals. In this work, and into the current work, memorial and persona became sources for content, as works paid homage to celebrated figures and close friends of the artist.

Whitten's work was included in the 1969 and 1972 Whitney Annuals, the landmark 1971 exhibition, Contemporary Black Artists in America at the Whitney Museum, Energy/Experimentation: Black Artists and Abstraction 1964–1980 at the Studio Museum in Harlem (2006); and High Times Hard Times: New York Painting 1967-1975, organized by Independent Curators International (2006). In Summer 2007, P.S.1 MoMA Center for Contemporary Art will present a solo exhibition, combining Whitten's epic 2005 painting, 9/11 with paintings from the 1960s; The Atlanta Center for Contemporary Art is organizing an exhibition of Whitten's memorial works for Spring 2008.