In the garden of Nimph Ancolie 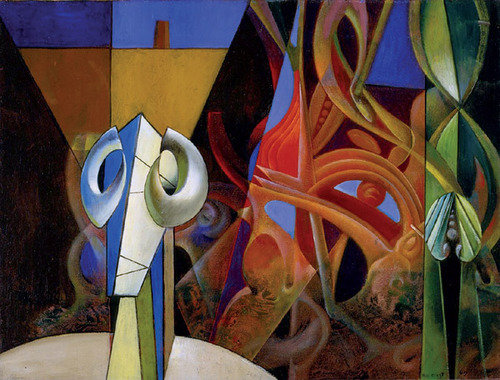 In the garden of Nimph Ancolie

Sometimes the largest paintings are the least known. The mural that Max Ernst painted in summer 1934 for the Dancing Mascotte in the Corso-Theatre on Zurich’s Bellevue measures 415 x 531 cm. For decades Pétales et jardin de la nymphe Ancolie, with its flesh-red flowers on green leaves in a weightless space, provided pleasure as a background for dancing couples. Because of damage to the lower half of the painting the background was twice over painted with a muddy gray and entirely covered with varnish; later this feast of lush vegetation was removed, broken down into panels, and entrusted to the Kunsthaus Zürich. This work, which is central to the oeuvre of Max Ernst (1891–1976), and not simply because of its size, now finally undergoes restoration at the Museum Tinguely and will remain there on permanent loan from the Kunsthaus Zürich.

A close view on the restoration
Visitors to the exhibition will find a specially constructed exposed workshop where they can follow the metamorphosis of the individual panels from gray to light blue as their appearance is transformed. The restoration, which is supported by the Museum Tinguely and the Foundation BNP Paribas Switzerland, will also expose those parts that Max Ernst modeled on illustrations he found in a nineteenth-century botanical encyclopedia, though extremely enlarged and turned upside down. Also revealed are a woman’s naked leg in the lower right of the painting, which is the linear pendant of a hand and figure on the “top” level that suggest Max Ernst’s alter ego: his incarnation as the bird Loplop. Lovers of gardens enter into a biomorphic event. Behind the flowers and leaves and a large, birdlike dancing element, they can make out the not yet awakened nymph Ancolie, whose “Mel-” Max Ernst nipped off in order to baptize her with a more life-affirming name.

Paradises and Downfalls
From the time he decorated completely the house in Eaubonne where he lived with Paul and Gala Éluard (1923–24), Max Ernst began his search for the goddess “Gradiva” who inspired male fantasies from Sigmund Freud to André Breton. Before the chimeras, barbarians, and angels of death returned to his work prior to the Second World War, the artist took delight in the joys of nature, in vegetal harmony, the pleasures of seduction, the nirvana of devotion. All is magic, all joyous play, “joie de vivre”. Rarely has an artist been able to give free rein to his/her unconscious. Soon, however, interlopers found their way into the idyll: carnivorous plants attack airplane parts (Jardin gobe-avions), and entire cities (Ville entière) are swallowed by rampantly grown forests. Driven from the noonday sun of the Gardens of the Hesperides and the Joie de vivre, a Swampangel survives in the undergrowth; a great Chant du soir sings in the twilight; a deep, gloomy night is falling on the Rhine (Nuit rhénane, 1944). Thus Max Ernst’s work, like his life, oscillated between metamorphoses of pleasure and the tragedy of European history; it explored associatively new experiential spaces of human existence.

A selection of works rarely seen
The thematic exhibition focuses on the re-born mural, on its central feature of mixing vegetal, animal, and human creatures. Additional paintings, collages, drawings, and rubbings (from the Histoire naturelle, for example) introduce the theme, while others reveal its echoes into his late work. After the artist’s militant Dada phase in Cologne in the early 1920s and his move to Paris, the joie de vivre returned to his work, responding like a seismograph to the crises of wars and revolutions but also to the promises of Eros, the pleasure of love, peace, and the imperturbability of the history of the earth. This is the first presentation of Max Ernst in decades in Switzerland, a country to which he was closely connected from the Giacometti family to Meret Oppenheim and where he found an admirer in Jean Tinguely. It was made possible by a number of works rarely lent, primarily from private collections but also from the Sprengel Museum Hannover, the Menil Collection in Houston, the Museum of Modern Art New York, the Peggy Guggenheim Collection in Venice, the Centre Georges Pompidou in Paris, the Kunsthaus Zürich, and the Kunstmuseum Basel. Above all, it is indebted to Professor Werner Spies, the finest connoisseur of Ernst’s work, who wrote the introductory essay for our catalog and contributed to the project in decisive ways.
Illustration: Max Ernst,La nymphe Echo, 1936. Oil on canvas 46.3 x 55.2 cm The Museum of Modern Art, New York. Purchase 1937 DIGITAL IMAGE © 2007, The Museum of Modern Art, New York/Scala, Florence © 2007 ProLitteris, Zürich