Imagine Los Angeles. This is a thematic exhibition comprising the creative production of a number of contemporary artists, writers, and filmmakers living and working in LA. In light of Umberto Eco's and Jean Baudrillard's notion of hypereality, the exhibition perceives the city as a place with unclear boundaries separating reality and the imaginary. 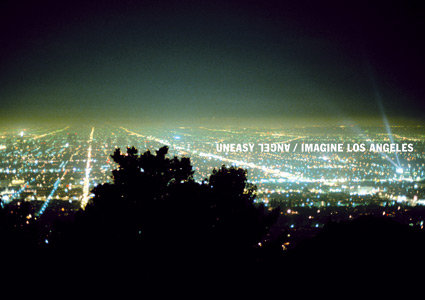 Uneasy Angel / Imagine Los Angeles is a thematic exhibition comprising the creative production of a number of contemporary artists, writers, and filmmakers living and working in Los Angeles. In light of Umberto Eco's and Jean Baudrillard's notion of hypereality, the exhibition perceives Los Angeles as just such a place- with unclear boundaries separating reality and the imaginary. In today's information society a city cannot be seen and marketed as a static, self-contained or isolated system anymore (Castells, 2004). Yet, a specific characteristic of Los Angeles is that its historical reality is absolutely democratized: Fictional environments seem to be a cultural foundation where both, originals and copies serve as historical reference points. The logical distinction between "real world"and "possible worlds" has been undermined because here everything must be like reality. What then might it mean to address the artistic production of this multi-layered city?

The perception of the artist as a travelling passenger in a hyper real, interconnected space between reality and fiction serves as a starting point for the exhibition. The culture of Los Angeles has expanded to that phenomena so much, that it became an experimental laboratoy for artists in their research and creation of "in between" spaces. Like the city itself, art created in Los Angeles could be described as "post-historical" or "hyper-real" But similar to the multiple practices within it, artists from Los Angeles can teach us a lot about both contemporary life and history: about its ambiguities, its layering, its complexities, its contradictions, its chaos.

As described often, L.A. is probably the most mediated town in America, nearly unviewable save through the fictive scrim of its mythologies. Anticipating the idea of the city as a fiction, simulation and simulacrum, an important notion about the myth of Los Angeles is based on the concept of fragmented, co-existing realities. Many of them are created by the local entertainment and media industry, constructing their very own dynamic and a concrete actuality.

The contemporary relevance of Beaudrillard's thinking may be to consider which contradictions are created by a highly mediated culture in terms of experiencing our own identities: if we live in a culture that worships the virtual, desire, craving, sensation, and simulation, how can we passively observe "what is"? How can we acquire a consciousness of attention to the internal such as to experience something as real? When the imaginary becomes a genuine experience, the sensation behind it disappears. It is what it is, and from there can proceed without contradiction. In this way, Los Angeles and its art become something totally authentic.