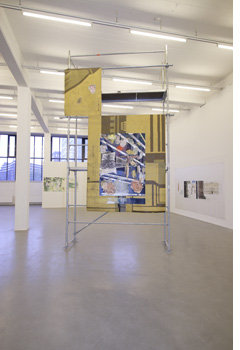 The concern of the exhibition GESELLSCHAFTSBILDER. ZEITGENÖSSISCHE MALEREI (Images of Society. Contemporary Painting) is to explore the relation of painting to society. To what extent art represents society, or subjects it to documentary treatment, or resorts interventionistically to social strategies are some of the questions it raises. The works exhibited include politically motivated murals in the tradition of Latin American mural painting, pictures that take their lead from history painting, and projects in public space. While the murals of the '20s and '30s still communicate unambiguous, sometimes party-political messages, the pictures of the young artists shown here, applied direct to the exhibition space walls, have the character of an appeal but resist being pressed into the service of a definitive statement. The works that engage with the tradition of history painting do so at various levels. Yet they consciously repudiate historicizing detachment to ex amine events for their current political relevance. The documentary content of what is depicted is not thereby denied, but its claim to authenticity is relativized and receives media-critical scrutiny. That painting arises not only in and for the immediate art context is evident from the urban projects, whose approach in the plein air tradition is nevertheless tested for its social potential.Whether easel paintings, murals, or installational arrangements, all of the exhibited works draw their subjects from daily life, science, and politics, often translating them, despite the recognizably non-subjective nature of their contents, into the artists' sometimes highly subjective worlds. The involvement developed in the process goes beyond documentarism of the present, countering the official visual language of the mass media with artistic positions that have a clear social underpinning.

In his installations, videos and collages, the artist, David Maljkovic, born in 1973 at Rijeka in Croatia, engages with aspects of the chequered history of his country. Above all, the far-reaching consequences of the transformation from a communist form of society to a capitalist one, and the associated economic and cultural ramifications, form the subtext of his artistic production. The places to be seen in his works are frequently deserted buildings and monuments from the 1980s which impressively reflect the promise of a better future and, simultaneously, because of their ruinous state today, also the melancholy failure of this promise.

The presentation Almost Here unites the tripartite video series, Scene for New Heritage, in a large, encompassing installation which has been especially conceived for it. In addition, it is presenting his collages that have arisen in this context, along with two architectural models from the 1970s of the monument of the Petrova Gora Park, which is to be seen prominently in the videos and collages. The combination of the historical models with his own, present-day works makes an exemplary basic trait of David Maljkovic's procedure apparent, for which the integration of research also counts, along with the interweaving of past, present and future.

A catalogue will be published by DuMont Literatur and Kunstverlag containing articles by Yilmaz
Dziewior and Anselm Franke, as well as an interview by Natasa Ilic.

The exhibition and catalogue are being sponsored by the Alfried Krupp von Bohlen und Halbach Stiftung.

Insert 5: Olaf Nicolai
Considering a multiplicity of appearances in light of a particular aspect of relevance. Or: Can art be concrete?
A room as display
Interior design in collaboration with KUEHN MALVEZZI
through 28 October 2007

The room is conceived as a display for a series of interventions for which the title, Considering a multiplicity of appearances in light of a particular aspect of relevance. Or: Can art be concrete? poses the question whether the 'concrete' element of art can be its commitment, its politics, its autonomy or a new configuration of experience and perception. To this end, persons from the areas of production of art, design, literature and politics have been invited to lectures and discussions. Each of the events will be recorded and later integrated into the room as a further position.