Das Prinzip. Photography. Objects found in a stage of transition - changing from one physical state to another - are of particular significance in this still young oeuvre. 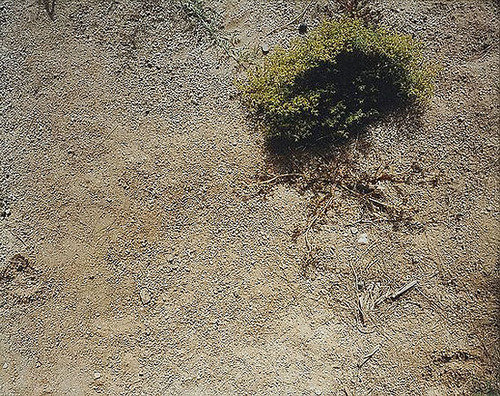 The title of this first publication on the photographic works of Johannes Schwartz is deceptive. 'Das Prinzip' (The Principle) suggests a truth or a dogma, which is not however present in the various works - mostly series that are here only represented by one image. Unless of course one were to define 'deceptiveness' itself as a principle.

The works are arranged sequentially but in reverse order: the first photo in the catalogue is thus chronologically the last one. Its title 'Winkels' (2007, Dutch for 'shops', German for 'corners'), with its deliberate arrangement of everyday objects suggests a general goods store, which retrospectively - after browsing through the catalogue - could also strangely be interpreted as a compilation of earlier works.

For example, if one compares the rustic typology of the box with other household utensils in 'Blindenzimmer' (Blind Room, 2001), the vertical alignment of the neon lights with their surreal hanging arrangement on isolated palm trees in 'Daylight' (2006), the sculptural appearance of the jewellery display bust with 'Pokalen' (Cups, 2001), the used packing case with the makeshift 'Kinderhütten' (Children's Huts, 1998), or the ascetic cool atmosphere of the overall photo with the aseptic aesthetic of 'Behandlungszimmer' (Treatment Rooms) of psychoanalysts (2002).

Johannes Schwartz reveals an equivocal and ambiguous reality which can apparently only be deciphered by the viewer through the titles - which, however, themselves increase the complexity of the photos. Objects found in a stage of transition - changing from one physical state to another - are of particular significance in this still young oeuvre. Thus 'Scattered Rug' (2005) becomes an allusion to a Persian floral carpet overgrown with weeds, while the leftovers of social encounters in the fireplaces from the series 'Meetings' (2005) bring to mind an entropic compost heap. The ruined weapons in 'Fire' (2005) lie around incorporeally and inconsequentially in the courtyard of a museum in Istanbul, while the vegetation of the horizontal Dutch landscape in 'Paashoop' (Easter Bonfire, 2003), has been vertically piled up in order to be burnt down. Johannes Schwartz plays with the conventions of appearance and disappearance and their narrative dimension.

In his series 'Stores' (Curtains, 2001), whose origins are a GDR furniture catalogue from the 1960s, he refers emphatically to the non-authorship as photographer, since the dots of the original offset print have also been enlarged. In 'Rembrandt' (2005), the title gives a clear indication of the image, which is itself already absent, however. The empty space of the taken-down picture on the wall now reveals a random 'painting', as if one were looking out of a cave into an abstract, infinite expanse. And what looks like a mysterious cellar in 'Schöner Wohnen' (Better Living, 2004), is in fact a room containing an exhibition of the same name, with three works of art that are at first hardly recognisable as such ('Curtain' by Felix Gonzalez-Torres, 'Lamp' by Richard Venlet, 'Gas Meter' by Jochem Hendricks).

In all the works, rooms, places and objects have been very specifically selected; they are sober and distantly portrayed, their rendering is pragmatic. Photography thus becomes a means of response to various possible realities. The fact that in his latest works Johannes Schwartz concentrated above all on capturing brief moments of longer processes strengthens the aura of mystery. Thus at first sight, the maltreated rooms in the series 'Junk' (2005) don't suggest the classroom of an art academy, nor does the pile of bones in 'Rudiments' (2005) bring to mind the refuse of a rosary factory in the glass cabinet of the municipal museum. With the strategy of subtly obfuscating contexts, Johannes Schwartz is a contemporary chronicler of today's complex and often profound reality. One presumes that 'Das Prinzip' (The Principle) can only be a deception.
Moritz Küng