The photographer develops and enlarges the project initiated a year ago with Invisible Women. Her camera captures the dignity of all those tireless, capable women who play such an essential role in humanity's long journey. 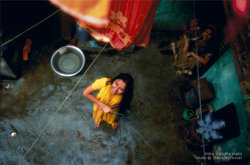 A new exhibition, MORE INVISIBLE WOMEN, reveals the hidden and silent existence of more women in the developing world, in particular in India and Nepal. In collaboration with AIDOS, Italian association for women in developing countries, the photographer Sheila McKinnon develops and enlarges the project initiated a year ago with INVISIBLE WOMEN.

Her camera captures the dignity of all those tireless, capable women who play such an essential role in humanity's long journey. The images portray moments of everyday existence, of women doing tasks that are so essential as to be taken for granted, so discreet as to be invisible.

INVISIBLE WOMEN, the poorest of the poor. Yet they are the ones who sustain the developing world. They are the ones who produce, store and prepare the food in rural areas. They are the ones who fetch water and firewood, and who often see to the building of dwellings. In cities, they perform the most menial tasks, those that no man wants to do. They are the ones who take care of the young and the elderly; the health and the education of future generations are in their hands. In times of crisis or war they are the only ones who keep the subsistence economy alive. In developing countries, the job of satisfying basic day-to-day needs falls to the women, but they are excluded from education and they have no power, not even over their own bodies. Women do two thirds of the work in the world but earn only 5 % of world revenue. If we truly want to break the vicious cycle of misery, and establish conditions in which future generations can be healthy and productive, women are the key factor. And they must not become merely visible: they must be allowed to speak."

Sheila McKinnon was born in Canada and has spent most of her life in Italy. She has worked as a photographer and journalist for various European and North American publications such as The New York Times, Newsweek, The International Herald Tribune, Die Welt, Beaux Arts Magazine and most of the major Italian publications. She has visited many developing countries working in collaboration with various humanitarian organizations such as UNICEF, the FAO, AIDOS, Sant'Egidio, Africare and others.