The show introduces a set of forms, every detail of which has been the subject of negotiation from the modes of construction, of exhibition and of communication. It will be a place both physical and mental, for although it is clearly situated, it will also intervene in the public realm outside the exhibition space. 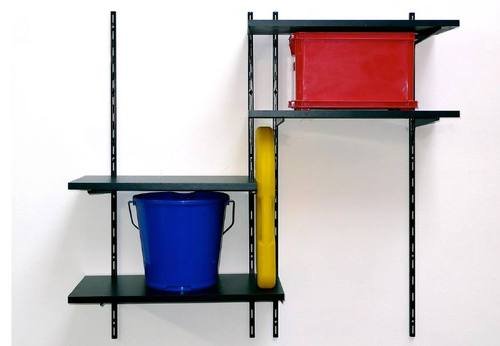 “Space does not exist for the eye only; it is not a painting: one wants to live in it.”
El Lissitzky, 1923

Ultramoderne was born of a desire to imagine a place, to imagine an exhibition as a form that implies various parameters, each of which may be called into question. The process chosen for its development therefore imposes a rule to all participants in the shape of a proposal, which consists of asking them to take charge of one particular aspect of the exhibition. The previously defined functions of the space generate an agenda that can be likened to an architecture programme. Various modalities of interventions capable of meeting the full range of the project’s requirements unfold around a series of general functions – “meeting”, “shaping”, “archiving”, “communicating” and “selecting” – representing different possibilities to intervene, oppose or supersede a series of elements that define the shape of the project. Each of these functions implies a string of other functions, which can only be conceived of as closely interrelated. These multiple propositions within the project will thus compose the landscape of the exhibition, while ensuring that the final outcome may not be predicted.

The show introduces a set of forms, every detail of which has been the subject of negotiation – from the modes of construction, of exhibition and of communication. It will thus bear the signs produced by a temporary community, which was required to reinvent its global framework of appearance – be it real or supposed. It will be a place both physical and mental, for although it is clearly situated, it will also intervene in the public realm outside the exhibition space. It opens question a series of historical models. Its topical focus consists in putting the principles underlying these models to the test in another context and revealing both their potentials and their limitations. The exhibition will showcase a group of artists from different countries working in various fields, who will be asked to contribute the referents they manipulate: notions of utilization and functionality of artworks, the use of a repertory of forms related to early abstractions, the idea of community or common memory, or ways of living. Modernity, as the common basis of a wide array of practices, also reveals historic, cultural and political differences provided one considers its history on a global scale.

Relationship between the work of art, the place and the public. Standards of the regular exhibition space are supplanted by other possible standards; in other words the standardization of spaces is countered by shared structures, which may in turn become the new standards. The works, objects and images, whether new or existing, reformulated or reactivated in this particular context, thus challenge spectators to read the exhibition on various levels. Visitors are invited to explore a space and a sequence of works whose status, oscillating between exhibition display and decor, architecture and World Exhibition pavilion, is ambiguous, while investigating forms whose use value remains indeterminate.

Among many others the Café de l’Aubette in Strasbourg could provide a possible model for the exhibition. This vast leisure complex, whose decoration had been designed by Hans and Sophie Taeuber-Arp and Theo van Doesburg, operated between 1926 and 1928. The decoration of the four-storey building consisted of the artists’ works in the dance halls, the movie theatre, the brasserie, the cafés, the tearooms, the entrance hall with its bar, and the billiard room. But the Aubette, which was to epitomize the teachings of De Stijl and represent the most accomplished materialization of van Doesburg’s theories, lacked success.

Ultramoderne deals with the notions of project and failure alike. Cast between modern ideals and ruins, the exhibition will appear to be in a state of perpetual construction or deconstruction, refurbishment and entropy. The project thus counterbalances a sort of a rebours manifesto with the necessary desire to ceaselessly reinvent, and a paradoxical look at the past conceived as future, by means of staging a potential space. A bilingual catalogue (French/English), 120 pages, A4, monochrome, edited with the support of Multiplan Group, and an album of the exhibition, color poster, 60x40 cm, will be released on the occasion of Ultramoderne http://www.artcontemporain.lu