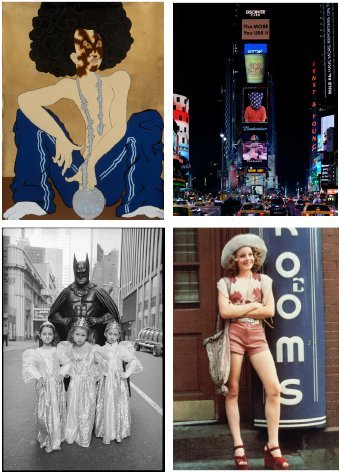 The House of World Cultures in Berlin reopens after a year's absence, in which it has upgraded its exhibition spaces to museum standard, with an interdisciplinary programme dedicated to the city of New York.

The overall programme features a number of prominent artists whose work has influenced American art as a whole, as well as having been highly influential within the global context.

The programme includes works by 30 artists and two artist collectives in five categories and a further 63 films by 56 directors, concentrating on different themes and realms of vision. The range of artists represented within the exhibition include historically important figures from the iconic, Marcel Duchamp, Mary Ellen Mark and David Hammons, to a younger emerging group of artists which includes Tavares Strachan, Iona Rozeal Brown and Laura Carton. The film programme traces the growth and the inter-relationship between the city as a subject and the city as a space for mediating difference. Both the extensive film programme and the exhibition programme are supported by a related publication, New York States of Mind, Art in the City, including interviews with the artists, essays and an extended section devoted to the film programme.

Embedded within NEW YORK STATES OF MIND is a series of performances, installations / screenings entitled Shangri-La, with a new performance commissioned for this occasion by Patty Chang and Terence Koh. Michael Joo is represented by a recantation of three video works framed within a new installation and Nikki S. Lee is presenting her recent film work a.k.a. nikki s. lee.

The artists from the Shangri-La category, together with Berlin based artists, will discuss their personal views in the first of the two panel discussions during the conference, Art and Economy. The second panel, entitled The Metanarratives will bring together five key individual voices from the curatorial, academic and collector's viewpoint.

A further satellite project, located in the heart of Berlin-Mitte, is In Neuem Kontext, which emerges out of the negotiated reconfigurations by young Asian artists who live in Berlin. For two weeks the six artists, Helen Cho, Hanayo, Yoon Lee, Yudi Noor, Yuka Oyama and Yukihiro Taguchi will transform the St. Johannes-Evangelist-Kirche’s neo-Romanesque church architecture into installations accompanied by performances and workshops. This project has been co-curated by Tereza de Arruda, Carson Chan and Shaheen Merali assisted by Paige Johnstone.


ART AND ECONOMY: CONFERENCE
Sun, 16. Sept
12 am - 3 pm
The Narrative and The Metanarratives panels

Exhibition "New York States of Mind" and catalogue funded by Hauptstadtkulturfonds. The "New York" festival is funded by the State Minister at the Federal Chancellery for Culture and Media, the Federal Foreign Office, DaimlerChrysler AG and Bayer AG.