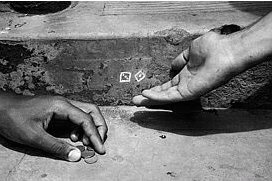 robin rhode was born 1976 in cape town and grew up in the south african johannesburg – a city with the highest crime rate in the world. already in 1997 rhode began to work artistically – his source of inspiration and the arena for his art was, and still is today, the street. whether a wall in johannesburg or a pavement in berlin – rhode temporarily occupies surfaces found in public spaces, draws objects with chalk on these and then interacts with the drawings: he draws a bicycle on the floor and tries to push it; he draws a car on a wall and tries to break into it with a crowbar.

these unique connections between drawing and performance are characteristic for robin rhode’s art: the imaginary drawn space becomes reality because the artist treats it like reality. a central theme in his art is thereby the common human trait of wishful thinking, a desire for something; in his performance ‘the score’ it is a live appearance of a band: rhode draws trumpet, bass and drum kit on a wall and then ‘plays’ – along to appropriate melodies and sounds that run in the background – on these instruments. through his interaction with the merely imagined and drawn, rhode creates a whole new, artistic reality, which is its own fulfilment: ‘sometimes if you have nothing, you actually have everything.’ (robin rhode)

while rhode’s early works only play with the tangibility of objects, this is redeemed in his sculptural works; they have reached the physical condition of an object. however, rhode only allowed for a limited lifespan: in his work ‘soap and water’ (2007), for example, next to a bicycle made from pastel green soap he places a tin bucket full of water – if you clean the bike it will dissolve into soapy water…

‘walk off’ is robin rhode’s first comprehensive exhibition in Europe. drawings, photographs, animations and sculptures are on display a.o. – complemented by an action room, where rhode will produce a wall drawing and develop a performance together with the dancer jean-baptiste andré and the composer thomas larcher. robin rhode lives and works in berlin and johannesburg.