The Fall. The exhibition describes her approach, between 1993 and today, and brings together some 50 works either belonging to the artist or coming from different collections. Stark's work includes paintings, collages and videos. 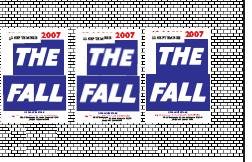 The Burgundy Regional Contemporary Art Collection [FRAC Bourgogne] is playing host, for the very first time in France, to a solo retrospective of the West Coast-born American artist, Frances Stark (born in Los Angeles in 1967). Titled The Fall of Frances Stark, this exhibition describes her approach, between 1993 and today, and brings together some fifty works either belonging to the artist or coming from different collections, public and private alike. Frances Stark’s work includes paintings, collages and videos, combined with bits of writings and letters. The artist thinks and rethinks about the artistic process in her writings, questioning the concept and praxis of repetition, reproduction, and accumulation. So in her obsessive and fragile collages, language is forever taking on different malleable forms, producing an unusual oeuvre somewhere between poetry, visual arts and references to her own life.

Through her activities as both artist and writer, in which she invests herself equally, Frances Stark strives to create close links between art and literature. The springboard for this show (presented successively at the Van Abbemuseum in Eindhoven, and then at Culturgest in Lisbon) is, incidentally, the publication of a book about her visual works, titled Collected Works, complementing the book Collected Writings 1993-2003 published four years back. Collected Works has been devised in tandem with the preparation of the exhibition. Frances Stark experiments in this dual project with the difference between reading a text on a wall or in a book, and the difference between touching and seeing a visual work in a book. (…)

Frances Stark's method is deeply contemporary in the way in which it links together essential thoughts and stories, which are apparently opposed, and no longer have any validity as such in the present-day world. Her references to modernity and its radical practices do not prevent her from referring to her debt to romanticism. There is real lyricism in her evocation of nature, sketched landscapes, forests of lines and sentences, and trees of letters, and in the recurrent presence of animals (monkey, skunk, snail and various birds) as metaphors of man and his fragile condition. But we also find categorization, that well known reflective praxis of conceptual artists, by way of boxes, file cabinets and other computer age symbols, which are at once places for organizing everyday things, including masses of papers and many things in progress, as well as the construction of thought with its "pigeonholes" and its arborescences.(…)

Frances Stark's different works come across as small successive forms in an apparent discontinuity, and yet they form a large unit. Through the various scattered features, which give the onlooker/reader free rein in their movements, she describes the distance of the subject from herself and from the world. The surprising title chosen for this show is "The Fall" and below, in smaller lettering, "of Frances Stark". Through her reference to the eponymous rock group, Frances Stark plays with this reference to a tour by a musical group (whence the choice of the poster stuck on a wall to illustrate the invitation), because this exhibition is being shown in three venues, as she also plays with the meaning of the name of the group itself, fall or autumn. She thus has some fun and games with what ordinarily would represent a first retrospective exhibition, the highpoint of a career.
Text by Claire Legrand, manager of the visitor's department