The practice of reflection. The exhibition presents art projects that on a regular basis are being launched in the magazine. Allegiance to the exigency of genuinetheory a theory which is,first of all, its own practice this is the program of Idea arts+society magazine. 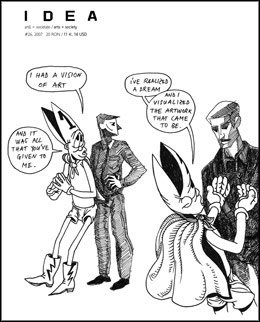 The practice of reflection

In collaboration with the Romanian Culture Institute, Index presents IDEA arts & society magazine. This presentation will take place in connection with the opening of exhibition project IDEA ­ the Practice of Reflection at the Romanian Culture Institute, Stockholm. The exhibition is curated by IDEA and presents art projects that on a regular basis are being launched in the magazine.

IDEA arts + society magazine, which is published in Cluj-Napoca, is perhaps one of the most interesting contamporary art magazines published in Europe at this moment. It is bi-lingual with texts published in Romanian and English. Amongst the contributors, besides the editors themselves, writers such as Marius Babias, Ami Barak, Vit Havranek and Dan Perjovschi recurrently feature texts. The IDEA arts + society magazine¹s homepage refers to the activities with the following description:

Allegiance to the exigency of genuine theory ­ a theory which is, first of all, its own practice ­ this is the program of IDEA arts+society magazine. This means: the practice of the concerned eye, which can be rigorous solely through the unconditional solidarity with the concrete. It is a practice of thinking which is alien to any aestheticism, hostile to any institutionalized transcendence, immune to the biased fiction of ideological neutrality, and remote from the pernicious language of our contemporary culture of Œexperts.¹ In brief, it is the practice of critical and defiant reflection, dramatically lacking in the intellectual-civic debates of present-day Romania.
http://www.idea.ro

The presentation of IDEA at Index will be organised as a conversation between editors Andrei State, Alex Cistelecan, Alexandru Polgar and Attila S. Tordai, and Robert Stasinski, project manager at Iaspis, Stockholm, and member of Index¹ board.

In addition, this evening host an artist talk by Daniel Knorr, and a book release with a publication by the artist. Daniel Knorr is a Romanian artist resident in Berlin. He represented Romania in the 2005 years edition of the Venice Biennial with his work European Influenza which consisted of a space left empty, opening up towards the residential areas surrounding the Biennale area. Daniel Knorr works in photography and with the notion of the invisible artwork, existing only as narrative and information.