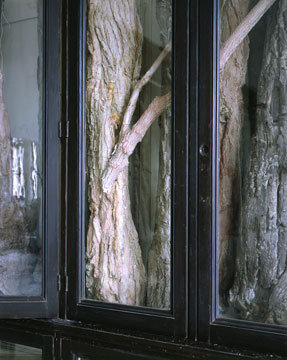 The common interest in themes such as pain, suffering, disability, guilt and atonement makes the combination of works by the Belgian sculptor Berlinde De Bruyckere and the British painter Jenny Saville not only comprehensible but actually quite obvious. However different their artistic materials and techniques – sculpture and painting – might at first appear to be, the two artists establish contact in their individual formulations. The collaged ground in Jenny Saville’s paintings not only makes apparent the object-like qualities of her painting, but assimilates them to Berlinde De Bruyckere’s technique of fragmentation, familiar to us from her horse torsos, and also apparent in her hermaphroditic wax figures. Conversely, however, the element of painting is an absolutely central factor in the achievement of the delicate surface structure of De Bruyckere’s wax sculptures.

Berlinde de Bruyckere (b. 1964, lives and works in Ghent) will install recent works in the large exhibition hall. The wax sculptures of tree trunks on display in monumental vitrines close the circle with the variety of natural forms – animal, human and now plant – that run through De Bruyckere’s work.

Jenny Saville (b. 1970, lives and works in London und Palermo) will be represented by the large-format triptych Atonement Studies, 2005-6. Along with another brand new painting, this work uses the depiction of physical disability to throw up questions of the integrity of the human body.

A key work by Dan Flavin (1933-1996), the American pioneer of Minimal Art, The Nominal Three (to William of Ockham), 1963, completes the triad – albeit on a less obvious level – and acts as an indispensable hinge between the other two. The meditative light installation, based on a mathematical principle and installed in the central space, balances the two violent and aesthetically conflicting positions of De Bruyckere and Saville. At the same time it makes clear the sacral character of all three rooms. The form of the triptych plays an important part in this.

On another level the combination of sculpture, painting and an actually immaterial installation brings to the fore the very different capacities of the various artistic genres to generate meaning, and thus also opens up a theoretical debate concerning media and representation.

Finally, the exhibition Berlinde De Bruyckere, Jenny Saville, Dan Flavin corresponds splendidly with the Summer exhibition Vis-à-vis. Bacon & Picasso, in that De Bruyckere and Saville address concerns that Picasso and mainly Bacon have also investigated, and develop these further in a contemporary artistic language. Chief among these are the question of the fragmentation of the body and its display, sometimes bordering on ruthlessness in such a way that it inevitably calls to mind depictions from Christian iconography.

In the last annual exhibition of Central Swiss artists, the Zurich-based artist Annemarie Oechslin (b. 1978), originally from Urn, was awarded the Lucerne Art Society’s Exhibition prize for her multi­media assemblage of photography and sculpture. Until then the artist, a graduate in photography from Zurich’s College of Art and Design, had chiefly been represented by works in the photographic medium. Sometimes she produces three-dimensional objects for her staged photographs, although in the past these have chiefly acted merely backdrops rather than being works of art in their own right.

Like the works shown in the annual exhibition, the appeal of the new installation, which bears the cryptic and associative title ‘jimjim’, lies in its ‘wit and poetic power’ (from the 2006 jury report). Enticed by a sweet melody – like a siren song – the visitor is invited to climb a wooden ladder to reach a cubic object floating in the space. The opening in the outer shell, which looks like a tree house, promises a glimpse of its mysterious interior...

The collection of the Museum of Art Lucerne consists of some 3,500 individual pieces, covering every field from Medieval panel painting to works of video art described as ‘new media’. Video made its entrance in Lucerne in the mid-1970s. The first tapes in the collection of this artistic form, now numbering about fifty titles, were acquired in 1983.

It will be impossible to preserve these early video tapes from the pioneering age in the Museum of Art’s collection in the long term. Firstly, the mechanical qualities of the tapes are changing, and secondly it is impossible to find replacement parts for players in the appropriate formats. In the near future it will become impossible to play the tapes on original players.

Consequently the question arises of how these artworks can be safeguarded. The most obvious possibility is that they will be transferred to a current format and safely backed up on to a new data carrier which will then be stored under ideal archive conditions.

In ‘Collection Lab: Video’, the Museum of Art Lucerne will examine the video art in its own collection, through various sub-projects and from an academic perspective, and present the individual steps in the process, in an accessible form, in a series of individual chapters.

27.10. – 25.11.2007
II Art-historical issues
Academic research into individual works
In collaboration with the Institut für Kunstgeschichte der Universität Bern (IKG)
Event on Wednesday, 7.11.2007, 7 pm (in German):
Presentation of the results, with reference to videos by Vito Acconci and René Bauermeister,
with Martina Becker and Nelly Jaggi, students at IKG Bern

19.1. – 17.2.2008
IV History of the works’ reception
On the history of video art in Lucerne
In collaboration with the Hochschule für Gestaltung und Kunst (HGK) Lucerne, art and transfer
Event on Wednesday, 23.1.2008, 7 pm (in German):
Guided tour of the exhibition with students from HGK Lucerne and Christoph Lichtin,
Curator of the collection, Museum of Art Lucerne