I Don't Know But I've Been Told, Eskimo Pussy is Mighty Cold. The artist presents a large-scale sculptural installation, her largest and most ambitious to date. Agathe Snow (b. 1980, Corsica) lives and works in NYC. 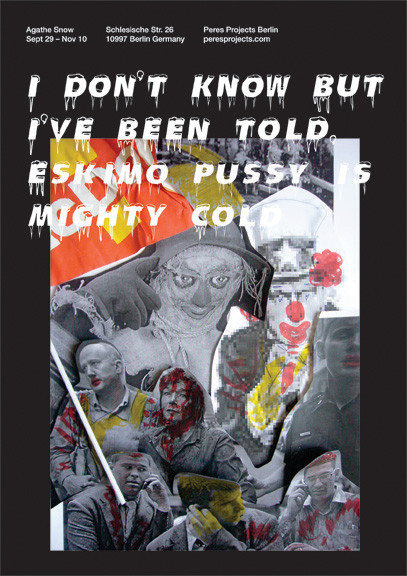 I Don't Know But I've Been Told, Eskimo Pussy is Mighty Cold

Javier Peres is very pleased to present Agathe Snow in her first Berlin solo exhibition "I Don't Know But I've Been Told, Eskimo Pussy Is Mighty Cold". The artist will present a large-scale sculptural installation, her largest and most ambitious to date.

Sometimes, you feel like sharing a piece of the MSN news, because somehow, sometimes it just makes everything actual. "An underground steam pipe explosion tore through a Manhattan street, swallowing a tow truck and killing one person, as hundreds of others ran for cover amid a towering geyser of steam and flying rubble. New York Police Department Spokesman Paul Browne said the explosion was not terrorism. "There is no reason to believe whatsoever that this is anything other than a failure of our infrastructure", Mayor Michael Bloomberg said at a news conference at the scene of the blast.… the explosion was most likely caused by the introduction of cold water into the pipe… Sixteen people were taken to Bellevue hospital including the person who died, two severe and the remainder suffered minor injuries, he said.

A plume of steam and mud shot from the center of the blast, generating a tremendous roar. The initial burst of steam rose higher than the nearby 77 stories Chrysler Building, one of Manhattan's tallest buildings. The air near the site was filled with debris. Heiko H. Thieme, an investment banker, had mud splattered on his face, pants and shoes. He said the explosion was like a volcano, 'Everybody was a bit confused, everybody obviously thought of 9/11…Thousands of commuters evacuated the train terminal, some at a run…

A small school bus was abandoned just feet from the spot where the jet of steam spewed from the ground. Large crowds and homeward bound commuters mulled in the streets around Grand Central Terminal nervously sharing information. Inside food vendors hurried to store their carts and yelled to commuters. For some time after the explosion no uniformed police or emergency personnel could be seen…a major entry point to the station. Commuters there relied on cell phones, passersby and Blackberries to decide whether it was safe to enter the station…

"I looked out the window and I saw these huge chunks that I thought were hail", she said. "We panicked, I think everyone thought the worst. Thank God it wasn't. It was like a cattle drive going down the stairs with everyone pushing. I almost fell down the stairs." Streets were closed in several blocks in every direction. Subway service in the area was suspended. The steam cleared at about 8 pm exposing a crater several feet wide in the street. A red tow truck lay at the bottom of the hole. There were also concerns about what was spewed into the air. Police were wearing gas masks in the streets. Millions of pounds of steam are pumped beneath NYC streets every hour, heating and cooling thousands of buildings, including the Empire State building. The steam pipes are sometimes prone to rupture, however. In 1989 a gigantic steam explosion ripped through a street, killing three people and sending mud and debris several stories into the air."

Agathe Snow (b. 1980, Corsica) lives and works in NYC and will be present for the opening. Snow's work has been recently reviewed in the New York Times, Artnet.com, The International Herald Tribune, V Magazine, Paper Magazine, New York Magazine,

Her work has been featured in recent exhibitions including "Three for Society" at 303 Gallery, NY; "Beneath the Underdog" at the Gagosian Gallery, NY; "Still Ill" at Momenta Art, NY; "Survivor" at Bortolami Dayan, NY; "While Interwoven Echoes Drip into a Hybrid Body: an Exhibition about Sound Performance and Sculpture," curated by Heike Munder and Raphael Gygax, at the Migros Museum, Zurich; "The Perfect Man Show," curated by Rita Ackerman, White Columns, NY; as well as a recent solo exhibitions at James Fuentes, LLC.