Jin Meyerson's paintings remind one of American news broadcaster's TV pictures absorbed by giants and spat out again with vehemence. The scenes in Till Gerhard's paintings might, at first sight, seem perfectly cosy but at second sight they at the latest cause discomfort. 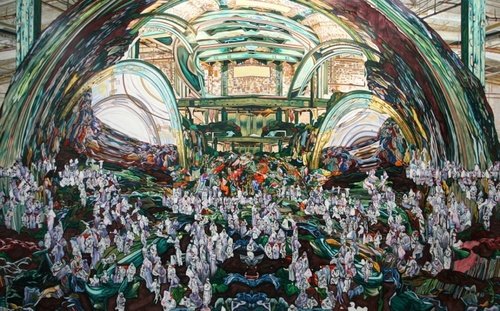 The Galerie Michael Janssen Berlin has the pleasure to present Jin Meyerson’s first solo exhibition in Germany in September. Meyerson, born in 1972 in South Korea and raised in the US, lives and works in New York and Paris. In recent years his works have been shown internationally at institutions and galleries, among them the Chelsea Art Museum (NY) and the Saatchi Gallery (London).

Meyerson’s paintings remind one of American news broadcaster’s TV pictures absorbed by giants and spat out again with vehemence. Glaring streaks of colour undulate on large-sized canvases and make the embodied figures look as if shredded by a psychedelic distorting mirror.

Meyerson, professing TV junkie and part of a generation of artists grown up with mass media, collects the flotsam of the daily pictorial overkill in his psyche, shakes it thoroughly and sends it back to the world outside, filtered through the cosmos of his private existence and seemingly without any assessment.
But the political dimension is already applied in the subject of the newscast pictures. Reports on natural disasters like the devastating hurricane “Katrina” in 2005, the attacks on the World Trade Center, or reports from the war in Afghanistan inevitably bestow a feeling of uneasiness on the viewer, the memory of collective helplessness and horror. The permanent cuts and abruptly interrupted narrative strands build the formal equivalent of the disturbing impression that Meyerson’s pictures leave on a deeper level.

After his solo exhibition in 2006 in the gallery’s showrooms in Cologne, the Galerie Michael Janssen now has the pleasure to present Till Gerhard’s second solo exhibition in Berlin.
Gerhard, born in 1971 in Hamburg, where he now lives and works, among others took part in exhibitions at the Hamburger Kunsthalle (Hamburg) and at Saatchi Gallery (London).

The scenes in Till Gerhard’s paintings might, at first sight, seem perfectly cosy but at second sight they at the latest cause discomfort. Ostensible unoffending photo templates of young people on festivals in front of moody sunsets are turned through painterly transformation into something sinister and threatening, with deformed faces, dark and threatening skies and spookily levitating shining entities.

With loose painterly gestures in lucid neon-colour hues and by means of impalpable shifts and inserting mysterious, inexplicable aspects that seem to be visible on canvas only for a couple of seconds only to disappear the next moment, Gerhard turns the icons of a hippie-contemplativeness from the sixties up to the present time into weirdness.

The channelling of such frightening elements in everyday situations -or rather vice versa, the discovery of weirdness in familiar surroundings- does not serve Gerhard as stylistic device for a gothic fictitious movie but documents his doubts on the innocence of the very real times of his childhood, which in retrospection and on photos seems unnaturally safe and sound.