Three days of the condor. The exhibition presents new and recent works about birds whose survival is endangered. Through his videos, sound works, and complex installations, Hakansson extracts fragments from natural cycles that he documents and recreates. Often with the aid of sophisticated technological means, the artist observesthe growth of plants, birds, and insects. 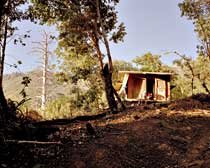 Three days of the condor

Birds have long held a fascination for Swedish artist Henrik Håkansson. For his first major exhibition in the UK he presents new and recent works about birds whose survival is endangered.

Hakansson is drawn to their isolation, vulnerability and beauty. In film, sound works and sculptural installations, he combines scientific systems of observation and communication with a visual language that frequently makes reference to popular film and music culture.

Critically endangered species such as the California Condor, Gurney's Pitta and Spix's Macaw become points of focus for an exploration of the ways we observe, represent and relate to the natural world. On the brink of extinction in the wild, these are some of the loneliest birds in the world.

Hakansson's carefully pitched work preserves and translates a vivid sense of the birds into the context of the gallery. It also acknowledges the complex economic, social and political challenges involved in our continued co-existence.