Ash. Since the early 1990s the departure point for his work has been the language of the human body, a language at times intensely autobiographical, and at other times highly politicised. In recent years his practice has diversified to encompass traditional media such as painting, sculpture and printmaking, as well as ambitious large-scale installations and mixed media works. 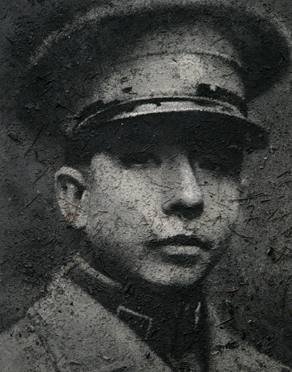 Zhang Huan (born 1965) is one of the most vital and interesting artists working in China today. Since the early 1990s the departure point for his work has been the language of the human body, a language at times intensely autobiographical, and at other times highly politicised. Early explorations of this theme were carried out through live performance, with Zhang Huan inscribing personal and political histories directly on to his own body, as in the calligraphic work 'Family Tree' (2000). In recent years his practice has diversified to encompass traditional media such as painting, sculpture and printmaking, as well as ambitious large-scale installations and mixed media works.

A key figure of Beijing's 'East Village' scene in the 1990s, Zhang Huan came to international prominence through his radical performances, in which social and political concerns were articulated through extreme acts of physical endurance. One of his most provocative works, '12 Square Metres' (1994) involved the artist painting his naked body in honey and fish oil and squatting for one hour in a public latrine while flies swarmed around him. Documented by arresting, social documentary-style photographs, the performance signified a powerful but silent protest at the filthy conditions endured by many Chinese at the time.

Other early performances by Zhang Huan referenced the abortions and female infanticides resulting from China's controversial 'one child' policy and highlighted other examples of Chinese governmental oppression. The artist's preoccupation with abject states and the body in postures of subjugation or repression finds sympathy with 1970s body artists such as Chris Burden and Marina Abramovic. Also instrumental to Zhang Huan's decision to deploy his body as his principal means of communication was a visit to the East Village community by 'living sculpture' duo Gilbert and George in 1993.

With his move to New York in 1998, Zhang Huan's performances developed from largely solitary acts into choreographed events often involving a cast of extras who enacted a series of brief scenes. This later strand of his performance work assumed a more ritualistic or metaphorical tone; pointed political commentary was sidelined in favour of broader metaphysical examinations of the artist's own dislocated sense of self and place. 'My America (Hard to Acclimatize)' (1999), for example, combined elements of mass demonstrations with religious or tribal overtones to suggest Zhang Huan's difficulty in adapting to America, while at the same time celebrating the freedom of expression he had discovered in his adopted country.

Upon returning to China in 2005, Zhang Huan established a large studio complex in Shanghai's southern Min Hang district where today he works alongside 100 studio assistants. This move marked a shift from a performative to an object-based practice; while the artist continues to favour direct confrontations with the concrete, physical world, it is primarily through painting, sculpture and works on paper rather than through his own body.

A revived interest in his native culture whether the symbols of ancient Tibetan mythology or the recognisable socialist realist tropes of the Cultural Revolution has accompanied Zhang Huan's return to traditional media. A recent series of colossal copper sculptures takes the hands, fingers, legs and feet of ancient Buddha figurines and blows them grossly out of proportion. Detached and disfigured, these anatomical parts are displayed recumbent on the ground, recalling the desecration of centuries-old artefacts under Mao Tse-tung.

Other works which engage with recent and ancient Chinese history are the 'memory doors', enormous antique house doors with iron fittings on to which Zhang Huan has half-screenprinted, half-carved scenes from Maoist China. The source imagery for these sculptural objects is appropriated from both domestic and official life, ranging from party meetings and People's Liberation Army training to family visits to the dentist or the zoo. By establishing a tension between the flat, two-dimensionality of the screenprinted sections and the three-dimensional relief carving of the other sections, Zhang Huan suggests the disjuncture between collective memory and official record that was Mao's legacy.

The idea of collective memory its composition and dissolution is further explored in a series of haunting monochromatic paintings and sculptural busts made from the ash from incense sticks burned in Shanghai temples. Collected weekly and sorted into palettes of varying tones and grades (from the finest dust to coarse flakes), the ash signifies the hopes, dreams and blessings of different generations. While possessing a poetic sensibility that is distinctly Chinese, these heavily-impastoed works also consciously reference European art history, whether the textural forms of Alberto Giacometti or the material density of Anselm Kiefer. Above all, their incinerated surfaces connote the vulnerability of corporeal existence.

Born in 1965 in He Nan Province, Zhang Huan studied at the Central Academy of Fine Arts in Beijing. His work is held in a number of important public collections including the Museum of Modern Art, New York, the Solomon R. Guggenheim Museum, New York, the Saatchi collection, London, the National Gallery of Australia, Canberra, and Centre Georges Pompidou, Paris.

In September 2007, the Asia Society in New York will mount the first ever museum retrospective of Zhang Huan's work. Curated by Director Melissa Chiu, the exhibition includes more than fifty works spanning performance, photography, sculpture and painting from all periods of the artist's career.

Towards the end of September, Haunch of Venison will launch a new project space in Berlin with a major installation by Zhang Huan entitled Berlin Buddha. A 4m-high ash Buddha will sit facing the aluminium mould from which it was cast, before slowly disintegrating over the three-month course of the exhibition.

In October 2007, Haunch of Venison will present Zhang Huan's first solo exhibition in London. The exhibition will feature a number of new paintings and sculptures from Zhang Huan's series of ash works.