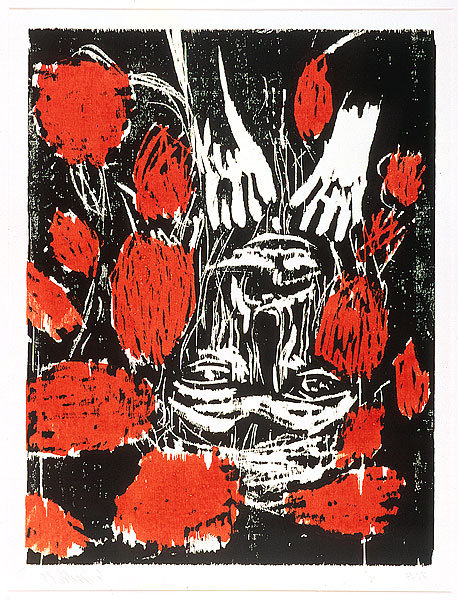 From October 11 to December 29, 2007, the Vonderbank Artgallery Hamburg proudly presents a group exhibition showing outstanding positions in German and American art since 1945.

Works by Georg Baselitz (*1938, D), Jörg Immendorff (1945-2007, D), A.R. Penck (*1939, D), Sigmar Polke (*1941, D), Robert Rauschenberg (*1925, US), James Rosenquist (*1933, US), Günther Uecker (*1930, D) and Tom Wesselmann (1931-2004, US) will be shown together in a strong and concentrated survey; the selected canvas, paper and aluminum works represent some of the most important developments in contemporary art. Each of the masterworks shows a wide variety of artistic and stylistic tendencies, a representational spectrum that spans from abstract to figurative, painting to graphic design, from socio-political questions to art theoretical ones.

Parallel to the exhibition in the Kunsthalle from September 16 to January 06, 2008, the Vonderbank Artgallery Hamburg will be showing numerous works by Sigmar Polke. The artists’ multi-faceted works demonstrate a seemingly inexhaustible inventiveness; his love of experimentation manifests itself in his prints on decorative fabrics and a variety of other materials, matrix dot images and paintings on black construction paper with interference color. His oeuvre can be described as anything but small format.

Jörg Immendorff and A.R. Pencks’ works show a handling of socio-political content, rendered in a representational painting style. Both painters deal with German history in their paintings. While A.R. Penck uses stick- figures and archetypical symbols to depict mankinds’ exemplary and collective ways of existing, of behaving, experiences and events in a reduced form, Immendorff approaches his subjects with wild brushstrokes and grand gestures, some expressive, some representational and powerfully garish.

Robert Rauschenberg, James Rosenquist and Tom Wesselmann are the main representatives of the pop art movement, which developed in the mid-1950s and became the dominant form of artistic expression in the 1960s. Everyday culture forms the majority of motifs, the world of consumption, mass media and advertising are subsumed and reappear in brightly colored, large-format canvases. “A46 Seven Up Blues” by Tom Wesselman also exemplifies how these artists felt free to disregard the typical painting surfaces: the painting is rendered in oil on a cut-out piece of aluminum.