Too Much, Too Little, Too Late. Included in the exhibition are ten brightly hued silk-screened headshots of various celebrities mined from the Post's Page Six gossip columns. Also in the exhibition is a free-standing self-portrait of the artist as his Simpsons avatar. 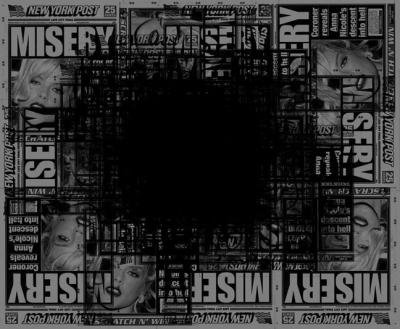 Too Much, Too Little, Too Late

John Connelly Presents is proud to announce Scott Hug's solo exhibition Too Much, Too Little, Too Late. Hug has been a prominent figure of the New York art scene for nearly a decade as an artist, curator, graphic designer, and publisher of the innovative and highly acclaimed magazine K48. Following his noteworthy solo exhibition at Locust Projects in Miami in December 2006, Hug will unveil a new body of paintings, sculp ture, video and text-based work that continues his incursions on media, pop culture and politics. Using imagery appropriated from popular journalism such as Time magazine and the The New York Post, Hug dissects our national obsession with celebrity "news" to suggest that there is a covert hypocritical morality to the nation's media that seeks to distract us from more pressing social and political concerns.

Included in the exhibition are ten brightly hued silk-screened headshots of various celebrities mined from the Post's Page Six gossip columns. Images of media obsessions such as Lindsay Lohan, Leonardo DiCaprio and Janet Jackson are coupled with self-help inspired captions such as "Get Well Soon", "Day of Rest" and "Exact Demands". In a related series - Hug's largest works to date -a metaphoric black hole has been created at the center of each canvas through the artist's process of layering front page images of media "disasters", such as Anna Nicole Smith and Hurricane Charley, until the content literally implodes. These works together with Hug's new video "Spin Control" - a never-ending spiraling color wheel familiar to Macintosh users as a symbol of processing data - suggests an impending and ambiguous collapse or apocalypse.

Also in the exhibition is a free-standing self-portrait of the artist as his Simpsons avatar. The promotional push for the recent feature length version of the long running animated sit-com The Simpsons included an opportunity for anyone to submit a photo of yourself that would be used to create an archetypal Simpson character in your likeness. The resulting life-size cardboard cutout of Hug clearly communicates the way we are seduced and manipulated by consumer culture and borrows a quote from recently struggling newscaster Katie Couric that reads: "I have days when I'm like, My God, what did I do?"

Scott Hug received his BFA from the School of the Art Institute of Chicago and a Masters in communication design from Pratt Institute. Hug's work has been featured at John Connelly Presents, Deitch Projects, D'Amelio Terras, Elizabeth Dee, and The Kitchen in New York. He has had solo shows of collaborative work made with artist Michael Magnan at John Connelly Presents and Hiromi Yoshii Gallery, Tokyo, Japan. His work has been reviewed in the New York Times and has appeared in the New Art Examiner and Zingmagazine. He was awarded a Rema Hort Mann grant in 2004.