The exhibition is marked by nine large billboard scale canvases in the Old Truman Brewery. Modern anxieties are framed within the tradition of contemporary figurative painting. A concurrent display of Semple's smaller paintings and drawings will also be on show at Martin Summers Fine Art Ltd. 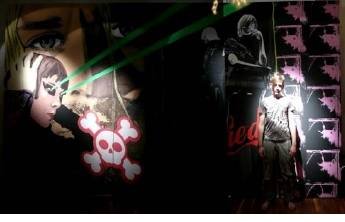 Martin Summers Fine Art Ltd. presents Stuart Semple’s solo exhibition Fake Plastic Love. The exhibition is marked by nine large billboard scale canvases in the Old Truman Brewery. Modern anxieties are framed within the tradition of contemporary figurative painting. A concurrent display of Semple’s smaller paintings and drawings will also be on show at Martin Summers Fine Art Ltd. in Chelsea during this time. Semple’s career catapulted after the opening of last year’s show at Martin Summers Fine Art Ltd. The exhibition sold out and since then Martin Summers has sold just over £1 million worth of Semple’s work in just 18 months. Semple’s art is informed by 80’s youth culture and influenced by the icons of pop art. Placed in the context of Semple’s adolescence, Kurt Cobain, Michael J Fox, MTV and Dolce & Gabbana are directly referenced on canvas. The repetitive graphics of advertisement and the free hand style of mark making, acknowledge predecessors including Andy Warhol and Jean–Michel Basquiat.

The new collection of paintings addresses the idea of reproduction and photography’s role in this process. Semple concedes identity is formed by a need to view reflections of the self and further defined by having similar media references. Inspired by the soundtrack of his teenage aspirations, Semple is a digital DJ, found in the process of sampling fragments of popular culture. The resulting track tells the tale of an artist that is both a product of his environment and an active manufacturer of culture. Making a reference to the cinema, the canvases are characterised by their High Definition widescreen TV equivalent scale. The proportions of this new digital format represent the way modern living has been hijacked by the media’s invasion on the senses. Yet, when sealed in paint, YouTube, Hollywood special effects and digital adverts become ancient snapshots of contemporary life.

Semple addresses isolation in a disposable consumer culture by injecting his work with a dose of humanity. Neglecting the function of technology, Semple re-creates printing techniques, mimicking details normally generated by silk screens and lithography by hand. Mechanisation and fast printing may churn out images, but Semple doesn’t reduce the artistic process to achieve the desired effect. Triggered by memory, Semple recalls phrases from the pop lyrics of his youth. Neon signs with the words ‘Kurt Lied’, ‘Under Neon Loneliness’, ‘Living Doll’ jump from the background. The words and images generate a dialogue, where what is described co-exists as a picture in the viewer’s mind. “All I’m trying to do is make paintings that make you feel exactly how you do when you listen to certain pop songs” says Semple.

Art dealer Martin Summers has been a long-standing supporter of Semple’s work. Summers gave Semple his first solo show at Martin Summers Fine Art Ltd. in June 2005. The sold-out exhibition was the first contemporary show the gallery has given in a number of years. Fake Plastic Love will also be the first show the gallery has ever given outside their Chelsea location. Both facts reflect upon the strength of Semple’s work and Summers’ faith in the future of this young rising talent. “Stuart makes me feel alive. He woke me up at a time when I had lost the excitement of discovering new talent. He is fast becoming one of the most important painters of his generation” states Martin Summers.