Aesthetic and Terror. The focus of the work is the atomic cloud itself. The images in the installation explore the absurd ambivalence concerning a-bombs. The artist uncovers the euphemisms, the special language use in order to play down atrocity. 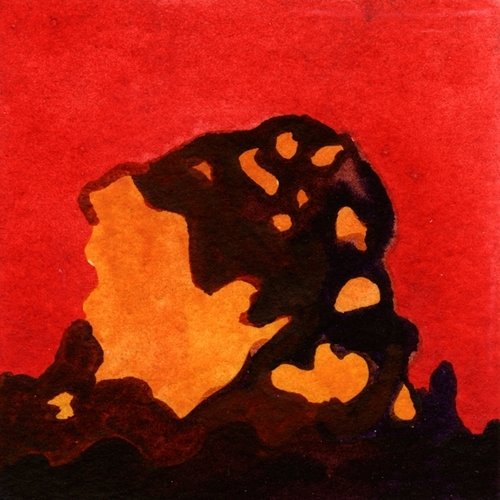 Facing the nuclear bomb and its terrible power of destruction, philosophers were at their wits' end: After a period of intellectual paralysis following the shock of Hiroshima and Nagasaki, they analysed the consequences of the atomic bomb and stated, that the last epoch of mankind had begun. With the almightiness of the bomb, mankind is able to blow up and erase the own species, whenever: Man has become master of apocalypse, oppression reigns. It is an irreversible process, requiring our blindness and repression in order to cynically cohabitate with ultimate horror and permanent threat.
Efforts to forget about ‘It’, the ‘Thing’, are in vain: It occurs all of a sudden and our fear is back. Since 9/11, everyone is nervous, waiting for the next strike. And we are fascinated from the, dare I say beauty? of the mushroom cloud.

The focus of my work is the atomic cloud itself. Some follow the classic mushroom formation while others such as underwater tests appear to be giant exploding sea monsters. I have studied and interpreted all of them, connecting the explosions by a common visual thread. The images in the installation range from loosely rendered sketches in languid earth tones to the sweet, candy-colored washes that dominate the current series. The individual panels vary in hue and sharpness, but there is a succinct implied mockery of the subject matter or perhaps it is a lighthearted attempt to contemplate an otherwise unthinkable fate. (Elise Blue)

In her installation work, the panels are covering walls like a glowing mosaic. Elise Blue explores the absurd ambivalence concerning a-bombs; she uncovers the euphemisms, the special language use in order to play down atrocity. As Mark Rothko used large canvases to visualize the sublime, Elise Blue’s tiny watercolor paintings reflect the temptation to belittle sensations of fear and panic. The apparently paradox between ‘aesthetic’ and ‘terror’ is unsustainable; these terms are obviously not contradictory. The sublime has been connected to cruelty for centuries and 9/11 stunned us with breathtaking pictures of ultimate and infernal brutality. And nuclear age has just begun. To be continued…

ELISE BLUE, born 1971, received her BFA from Massachusetts College of Art in Boston, MA, in 1993. Since 1998 she had several group and solo exhibition in the US. Elise Blue lives and works in Chicago. Her current exhibition ‘Aesthetic and Terror’ is part of Chicago Artists Month, October 2007. Elise Blue’s works will be presented in a prominent group exhibition in Europe in 2008.