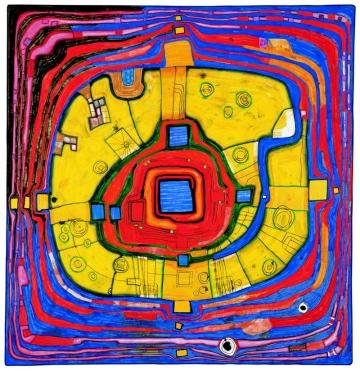 The Art of Friedensreich Hundertwasser

Friedensreich Hundertwasser (1928–2000), painter, graphic artist and architect, was one of the most unusual artistic personalities of the 20th century. His rich creative fantasy was revealed equally in painting, graphic art, architecture and design. He used every means to express his life philosophy manifesting the creation of a harmony of humanism, man and the environment embracing him.

Although in the course of his life, the artist, born in Vienna in 1928 as Friedrich Stowasser, felt at home in countless locales across the globe from Japan to New Zealand, he always retained the Austrian roots of his identity. His art derives from the world of turn of the century Vienna, its sources discernible in the treasures of the Secession and the working methods of the Wiener Werkstatt. In the trajectory of his career, however, he was influenced by such diverse artistic phenomena as naïve painting, Informel, and the architecture of Antoní Gaudí. We can observe an excessive luxuriance of colour and forms in his extraordinarily rich graphic and design work, just as in his controversial buildings. While nature is often abstracted in his pictures, verdant trees and blossoming shrubs entwine his edifices, veiling them and filling their apertures; the colourful undulations of these houses, every angle moulded into a curve, integrated into the architectural milieu, proclaim the ecological world view of their author.

The exhibition at the Museum of Fine Arts presents a selection from the collection of the KunstHaus Wien, which preserves Hundertwasser’s estate. Alongside the works of painting and graphic art arriving from the museum in Vienna, tapestries designed by the artist will also be on display, and photographs and preparatory studies of his buildings will provide a sampling of his architectural oeuvre. The show thus aspires to furnish a comprehensive picture of the life oeuvre of an artist who called attention to himself not only with his artwork, but also with his philosophy and school of thought, as well as by his eccentric behaviour; he was, all in all, an intrepid and audacious warrior of human rights, world peace and environmental protection.