The World as a Stage

An exhibition which explores the rich historical relationship between visual art and theatre. The group show brings together a key group of 16 international, contemporary artists and will comprise a selection of large installations, sculptures, performances, films, participatory works and events. It will include a number of new works made especially for the exhibition. 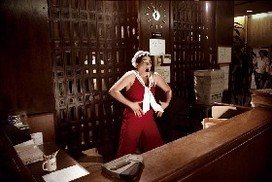 The World as a Stage is an exhibition which explores the rich historical relationship between visual art and theatre. The exhibition brings together a key group of sixteen international, contemporary artists and will comprise a selection of large installations, sculptures, performances, films, participatory works and events. It will include a number of new works made especially for the exhibition.

A central theme will be the extent to which a sense of theatre, or spectacle, has an impact upon the gallery visitor’s experience. Different elements of theatre – back stage, actors, props and audience – will be considered in relation to the customs of art and exhibition making – studio, gallery, artist and viewer.

Works will be displayed both inside and outside the exhibition space drawing attention to the theatrical nature of the everyday and incorporating the viewer into the work as both willing participant and oblivious performer viewed by others. Tino Sehgal’s work, This is New 2003, will involve the visitor at the entrance of the exhibition. As the public hand over their admission tickets to the gallery assistant, he or she will announce a headline from a daily newspaper followed by the title of the work, thereby interrupting the realm of aesthetic contemplation with that of daily news and events.

The centrepiece of the exhibition is Rita McBride’s Arena1997, a fibreglass sculpture in the form of stadium seating which will be used to stage live performances during the exhibition. The exhibition will also include Mario Ybarra Jr’s Sweeney Tate 2007. Ybarra will transfer the barber shop where he runs a gallery in China Town, Los Angeles, to Tate Modern. The installation will include numerous drawings and objects that reflect on barbershop culture. The artist will invite London barbers to take part, culminating in a one-day event where a winning hairdresser will be chosen.

Other highlights include Jeremy Deller’s installation and video The Battle of Orgreave Archive (An Injury to One is an Injury to All) 2004 which explores the events of 1984 when the National Union of Mineworkers went on strike culminating in the police and strikers charge through the village of Orgreave. The video depicts a re-enactment by one thousand participants, many of whom were involved in the original action. The final act in the exhibition will be Dominique Gonzalez-Foerster’s atmospheric blue room installation Séance de Shadows II 1998 which will transform the visitor into a performing ethereal shadow cast on the long exit wall of the gallery.

The World as a Stage will tour to the Institute of Contemporary Art, Boston, from February 1 - April 27, 2008 and the exhibition will be accompanied by a fully illustrated catalogue priced at £12.99.

Supported by the Polish Cultural Institute