Gursky has captured the essence of the economic and social situation of the late 20th century. This exhibition presents some 25 works by the artist, most of them created in 2007. They include new motifs within the familiar thematic spectrum of recent years, such as a stock exchange trading floor in Kuwait and the interior of a Frankfurt nightclub, as well as photographs from the latest series Pyongyang and F1 Pit Stop. 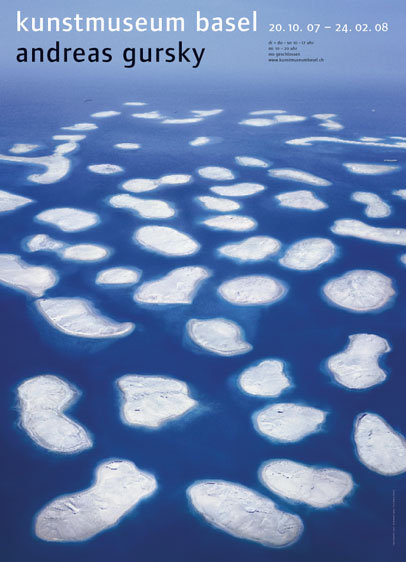 Andreas Gursky, who was born in Leipzig in 1955 and now lives in Dusseldorf, is widely regarded as one of the world’s foremost contemporary photographers. Among the hallmarks of his work are his use of colour, his supersize formats and his excessive deployment of digital image processing.

Few artists have managed to distil the specific characteristics of a certain culture, the mindset of a generation or the zeitgeist of an era into a single work. Just as a handful of iconic paintings have shaped our view of the Renaissance, so too has Andreas Gursky captured the essence of the economic and social situation of the late twentieth century in such works as Kuwait Stock Exchange.

Gursky tends to focus on crowds of people and the places where they assemble, and on the structures of the globalised world with its production, trade, consumption and leisure. In one of his most recent cycles of photographs, Pyongyang, he takes this theme one step further, casting his gaze on a country that is one of the last unmistakably non-globalised societies in the world. This is no everyday scenario, but an organised mass event with an ideological back-ground. Gursky, however, does not use the images to make a statement about the political background of the event. Instead, he uses them as visual raw material to be processed according to his own distinctive compositional approach.

In addition to the Pyongyang series, other recent groups of works indicate a shift in direction away from his previous individual photographs. These new cycles cover a broad range of themes as diverse as landscapes, Gothic church windows and Formula 1-racing. For all their differences, however, the works share clear compositional similarities that speak the same aesthetic language that rings out in Gursky’s earlier work. In his choice of detail or the arrangement of digitally juxtaposed visual elements, Gursky explores the question of how to generate ornamental structures and even symmetries on the picture plane. This calls for an abstract take on the subject matter, seeing it not only in terms of its mimetic function, but also as a kind of construction kit filled with the building blocks of formal vocabulary that Gursky uses to compose his pictures. For this purpose, the artist often chooses an elevated vantage point, as in the James Bond Islands or Dubai World. By giving the structure precedence over the visual reality, and thereby making it absolute, Gursky manages to lend his photographs a universal validity. In this respect, his compositions go far beyond documenting the situation they describe, becoming symbolic forms that provide an insight into the way the world is today.

This exhibition, in concentrated form, presents some 25 works by the artist, most of them created in 2007. They include new motifs within the familiar thematic spectrum of recent years, such as a stock exchange trading floor in Kuwait and the interior of a Frankfurt nightclub, as well as photographs from the latest series Pyongyang and F1 Pit Stop.

During the exhibition there will be a wide-ranging programme of related events.

Swiss artist Otto Meyer-Amden (1885-1933) and German painter Oskar Schlemmer (1888-1943) first met in the summer of 1911 in Christian Landenberger’s painting class at the Stuttgart Academy. When Otto Meyer moved to Amden in Switzerland in the autumn of 1912, the two peers kept up a prolific correspondence. Their letters bear witness to a deep mutual respect and understanding. This exhibition juxtaposes the drawings and paintings of both artists. In spite of their superficial differences, both reveal a tendency towards geometric abstraction and forms charged with spiritual content. One of the highlights of the exhibition is the display of Schlemmer’s rarely-seen "Fensterbilder " ("window pictures"), which are on permanent loan to the Kupferstichkabinett.

Johanna Billing
Curator: Philipp Kaiser
The video works by Swedish artist Johanna Billing (b. 1973) oscillate between documentary and staged scientific experiment. Billing examines social rituals in which, for instance, some young people reconstruct a long-forgotten experiment or artists sing a melancholy ballad in solidarity. By focusing on the dialectical relationship between the individual and the community, Billing reveals processes of social erosion, without making value judgements. The artist’s video works have been shown in many international group exhibitions. We have now compiled a concise selection of her latest works.