Widely recognized for his large-scale, subdued photographs of alpine landscapes, Niedermayr exhibits works from the ongoing series Alpine Landscapes alongside photographs from his recent series Bildraum. In all his work, he maintains his focus on man's perceptive relationship to his surroundings. For him, space can be experienced only through a combination of movement and sensory perception. 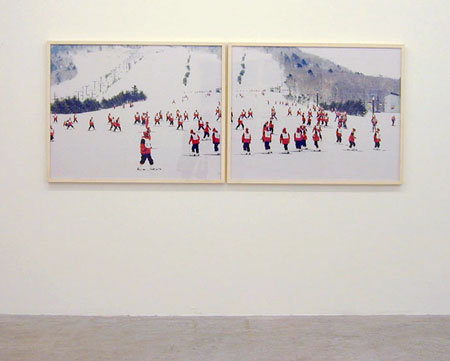 Galerie Nordenhake is pleased to present a solo exhibition of Italian artist Walter Niedermayr in its new space at Lindenstrasse 34. Widely recognized for his large-scale, subdued photographs of alpine landscapes, Niedermayr will exhibit works from the ongoing series Alpine Landscapes alongside photographs from his recent series Bildraum (Image-space). For this project he has been following the well-known Japanese architecture firm SANAA, founded in 1995 in Tokyo by the architects Kazuyo Sejima and Ryue Nishiwaza, for the past six years. The resulting multi-part photographs are highly subjective interpretations of the architectural spaces with a special focus on atmosphere, reception as well as the surrounding area of the buildings. The same pale, penetrating light that spreads across a field of snow illuminates the photographs of interiors, corridors, and construction sights of the Bildraum series. Although there hasn't been any direct collaboration between the photographer and the architects their mutual appreciation resulted in the publication of a comprehensive book, which allows associations between the two different practices.

When compared to the other means of representation available to architecture, such as the sketch, model, or animation, photography appears as the most subjective way to produce an impression of the space, especially since the photographer must move through and interact with the architecture while recording with his camera. Bildraum S 151 from 2006, Niedermayr's photograph of the Glass Pavilion at the Toledo Museum of Art (Ohio) presents a cross section view of the corridors that wind their way from room to room. The space is given time as the three panels simultaneously record multiple events in one single moment. The transparency of the photographs captures the architectural effect of the building. There, visitors encounter a series of interconnected rooms individually enclosed in clear glass that offer clear sightlines into the other rooms and the courtyards. The building is designed to make visible its structure in its entirety, yet Niedermayr's photograph shows that the whole must always exist in its coordinated parts.

In all his work, Niedermayr maintains his focus on man's perceptive relationship to his surroundings. For him, space can be experienced only through a combination of movement and sensory perception. It is impossible to fully capture a space in one photograph. His photographs are defined by sequences or shifts in the images presented. His approach is clearly reflected in the "doubling" effects, in which one element appears simultaneously in multiple photographs, creating an alternating field of reference. In the triptych Schnalstalgletscher 38 some of the colourful specs of skiing bodies on the vast snowy ground appear on more than one photograph thus breaking the spatial coherence of the photographic picture. For this work from 2003 a small section of ski loop was shot from three, only slightly different positions. The individual, experienced fragments come together to form a comprehensive perception of the whole.