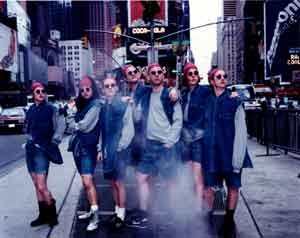 From east to west, from the capital to the mid west: seven different American lifestyles and artistic positions will be presented in the exhibition „American Beauties“ from 10.10.07 till 6.1.2008 in the House of Photography of the Deichtorhallen Hamburg.

Impressing images by Karl Struss show views of New York City from the beginning of the 20th century. Distinctive people of this metropolis are the theme of a series of photos by Lisette Model who let the metropolitan zeitgeist of the 20’s revive.

With the works of David Hockney and Larry Clark two completely different artistic lifestyles are facing each other. The life of a clique in the small American town of Tulsa, dominated by boredom, drug consumption and sex at the end of the sixties presents the homonymous portfolio of Larry Clark. David Hockney, on the other hand, in his intimate pictures, shows his immediate vicinity, his friends, parents and aesthetic influences in the California of the 70’s, which permit one to sense the ease and joy of life of the west coast.

The „Beauties“ of America in a double meaning are approached by Wim Wenders and Nan Goldin. The series „Written in the West“ by Wim Wenders shows an America which could not have been painted any better by Edward Hopper: Lonely roads with the classic wood architectures of the West, diners with the flair of the 50’s, the wideness of the West.

The seldom shown series „James King: Supermodel“ by Nan Goldin with the contemporary beauty idol of top models brings us back to the presence of the „Big Apple“.

The collective artists Art Club 2000 examines the conditions of artistic productions through photography in the changing New York districts like SoHo and Chelsea in the middle of the 90’s.

In the exhibition only art editions are shown, a strategy of presentation which emphasizes the serial character of the medium photography. They come from the F. C. Gundlach collection/House of Photography, the Galerie der Gegenwart and the Museum für Kunst und Gewerbe. This ist he first exhibition which affirms the cooperation of the Deichtorhallen with two of Hamburg’s eminent art museums along the Kunstmeile (art mile).

To the inaugration of the exhibition and within the framework of the Design Festival Hamburg 2007, the Hamburg fashion labels FKK, Zwei Körper und Menue= invite to the Fashion Show „The Walk“ in the northern Deichtorhalle.